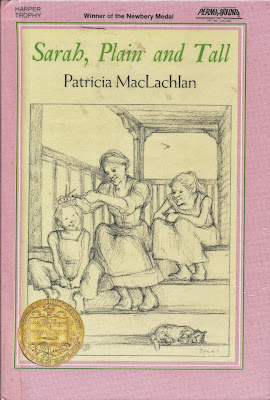 
This review is not just about the first novel in the series, Sarah Plain and Tall, but the next two in the trilogy as well: Skylark and Caleb's Story.  I read them all together and they worked well as a set, feeling like one complete story about a very interesting family.  I was first introduced to the book by way of the movie, a Hallmark film that came out in 1991.  It starred Christopher Walken and Glenn Close, an odd pair, but I remember watching it as an eight-year-old and really enjoying it.  I'd like to revisit the movie one of these days to see how it compares to the book, but I would bet that the novel is better.  It's a simple tale about a simple prairie family and the unusual way in which they added color to their lives, but it's one that is well-told and a joy to read.

Sarah, Caleb, and Jacob Witting are a family without a mother, living on a farm in the wide-open world and longing for company.  In Sarah, Plain and Tall, Jacob writes an advertisement asking for a new wife & mother for his children.  The person who responds is Sarah, a woman who is as strong as the New England sea that she loves and as kind as the mother she has always longed to be.  In Skylark, hard times come to the land, as the rains don't fall & the earth dries up.  Many families are forced to leave, but the Wittings won't give up without a fight, even if it means splitting up and taking the children to Sarah's beautiful northern homeland.  And in Caleb's Story, two more members of the family are introduced, Cassie & John, a young girl & an old man who don't get along, but who share bonds stronger than any trouble and a love that will keep the family together through thick & thin.

All three of these great books is worth a read.  I'm not sure how they would all hold up on their own, but taken as one story they work very well.  The last was my least favorite, but by that time I cared about the family and wanted to see how it would all end, so I didn't mind imperfection.  The first two are pretty wonderful.  The writing is very simple, very beautiful, and tells a story without a lot of distraction or added drama.  All the books are written from a child's point of view, so often I had to infer what the adults were thinking or feeling, but that was actually enjoyable.  The land that the story was set in appealed to me, so harsh and so lovely, a great backdrop for the tale.  If you like the Little House books you'll enjoy these ones too; they have less detail & more emotion, but they're equally strong, pleasant, simple, and fun to read.