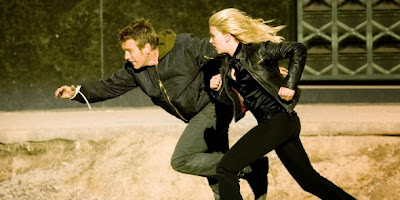 
When I remembered that The Island existed and that I had missed it I was excited.  I was looking forward to a cool dystopian plot, a great sci-fi vibe, and a good performance by Ewan McGregor.  What I forgot, apparently, was that Michael Bay is the director.  If I had known that I would have tempered my expectations and/or steered clear.  He's just not my style.  I guess I don't like action movies, or at least ones that totally ignore the basics that make good movies: a gripping story & some solid acting.  Michael Bay movies put those in the background or bury them under a pile of exploding crap: The Rock, Armageddon, Pearl Harbor, all the Transformer films.  They all have a good story, they have some nice actors, but they were turned into awful movies by a director who has zero touch.  And The Island is no exception; the pieces are there but the construction is so bad that the final product leaves you wondering why you ever wasted your time.

The story follows Lincoln Six Echo, a unhappy man in a near perfect society.  He believes that he lives in a post-apocalyptic wolrd in which the survivors of some great contamination have been gathered together and are now living in a very sterile facility.  They work, they exercise, but they never leave the compound and they are under a strict set of rules.  Lincoln feels like there must be something more, that there must be answers to his never-ending questions.  Everything changes when Lincoln's friend Jordan Two Delta is chosen to go to the Island, the only safe place in the outside world, a perfect utopia for those lucky few.  But when Lincoln discovers that Jordan is actually going to be killed, he knows he must save her, save himself, and uncover the secrets behind this seemingly perfect world.

If the movie had just continued with the setup and focused on it for two hours I think I would have been happy.  The plot was really excellent and I wanted to know more, to understand this strange Huxley-like future.  But of course Michael Bay let his style take over the story and all hell broke loose.  The plot was abandoned, a thousand gunshots were fired, countless vehicles exploded, and at one point the main characters fell thirty stories and luckily landed in a net.  It was just ridiculous action and silly scenes.  I was so disappointed that the movie became not about the storyline but about the action.  That's not what I wanted.  Nor did I want Ewan McGregor to speak in an American accent or Scarlett Johansson to speak at all.  She is a horrible, horrible actress and cannot possibly be believable when she's trying to be serious.  She's done sexy & funny well, but not dramatic and emotional.  She was bad, the constant running was bad, and the movie turned out not to be as good as I had hoped.