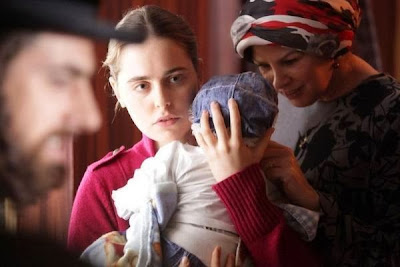 
With a name like Coen it might not surprise you that I've always had a slight interest in Jewish culture and history.  I can't track my ancestors back far enough, but my family obviously has Jewish roots, even if we are no longer practicing.  So I enjoy movies about the troubles and traditions of this very interesting group of people.  But Hollywood usually doesn't give me the films that I'm looking for.  Either the characters are too stereotypical & comical or the stories are set in WWII.  Don't get me wrong, I love a good Jew joke and I'm fascinated by the World Wars.  But I've always wanted something more, a substantial film about the culture that isn't based on the culture, but rather the people who happen to be a part of it.  Apparently I was just watching too many American-made films and needed to watch one out of Israel, because Fill the Void was what I was searching for; a movie about people who happen to be Jewish. 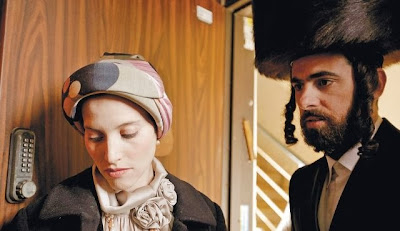 The story revolves around a young woman named Shira and her family.  They are Hasidic Jews, and Shira's father is a very respected Rabbi and an important leader in the community.  She is the baby of her family, unmarried but finally of the age to be matched up with a young suitor.  She and her mother work on finding the right partner, happily planning the future.  Meanwhile, another member of the family is about to be added in.  Shira's sister Esther, the beauty of the area, is about to have a baby.  She is married to Yochay, a handsome and kind husband.  They are a wonderful couple, and the entire family prepares to welcome in the new life and thank God for the blessings that have been bestowed upon them.  But sadly, tragedy is about to strike.

Esther dies giving birth to her son, Mordecai, leaving her husband alone and in despair.  The entire family is shocked and devastated, as their perfect existence has just crumbled apart.  But life must go on, and for Yochay & Mordecai this means finding a wife & mother who can fill Esther's vacant role.  The speed at which a replacement must be found disturbs all involved, but they know that they must look out for the welfare of the child and his lonely father.  When a match is found for Yochay all seems to be well, but the marriage would force him to leave the country, something that Shira's mother cannot bear.  And so she offers her second daughter to her son-in-law, proposing a marriage that would keep Yochay in the family, Mordecai in his grandmother's arms, and return the family to balance.  But Shira must consent, and the very idea of marrying her late sister's husband fills her with dread and a guilt that she cannot handle.  A decision must be made and Shira must face her fears, or this once-harmonious family will be broken forever. 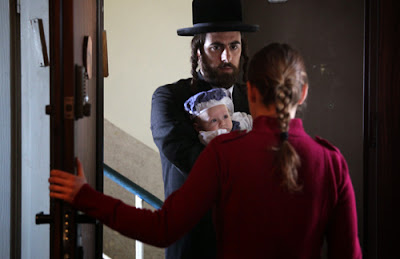 Fill the Void was exactly what I wanted it to be; a great movie that could have been set anywhere, anytime and been just as good.  As it was, it revolved around Judaism and that worked for me.  It was a very interesting look at a culture without being documentarian or boring.  It showed common practices, beliefs, traditions, but steered clear of religion and the arguments that naturally go along with that subject.  It was fascinating to see people living a life so unlike my own and yet having the same problems, fears, heartbreaks.  Now, I'm not saying it was groundbreaking to learn that Jews love & lose just like regular people, what I mean is that the movie was an Israeli version of a film that could have been made in Hollywood, showing us that the same story is being enacted all over the world, that despite our varied rituals we are very much alike.

That aside, the movie was very well done.  It was surprisingly uncomplicated for such a dark plot.  Death & hard choices, but no twists, no over-dramatics, no ridiculous outbursts.  It was a movie about a bad time in the life of a family and how they dealt with it.  Not every decision they made was perfect, but the story was made to feel realistic and believable and it worked.  The acting helped the story tremendously.  It was absolutely brilliant, with not a single flaw.  The side actors were all well-done, strong but not distracting.  And the main characters were excellent: Yaron as Shira, Klein as Yochay.  They played their parts perfectly; young, afraid, hurting, vulnerable, but never whiny or pathetic.  It was a very bold story with no frills, just great movie-making.

Now, perhaps not everyone would enjoy it as much as I did.  It was in Hebrew of course, and watching a film in subtitles is not for every person.  I like watching films in their native language; it makes me feel as if I'm learning something while I'm enjoying a movie, but again not everyone loves it.  And it wasn't fast-paced, action-packed, or incredibly gripping.  It was a simple story and the film wasn't long, so if it didn't grab you at the beginning you might blink and wonder what the big deal was.  But to me, the big deal was that this film delivered what I wanted; a good plot, well-acted characters, a peak into another world, and a light touch when it came to emotion and drama.  Perhaps not a movie for the masses, but a very good one for those willing to appreciate it. 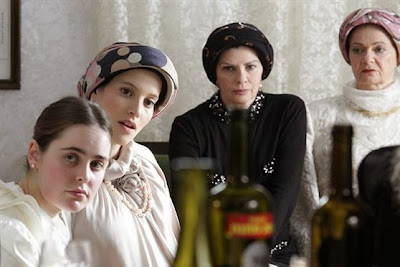 Video - With an aspect ratio of 2.35:1, the video quality was quite nice.  The picture was crisp, no problems, and it was enjoyable to watch.  The movie might not have lent itself to great cinematography, but the scenes were simple & beautiful.

Audio - The film was done in Dolby Digital.  The sound quality was good, nothing to praise or criticize.  The movie can be watched with English, French, or no subtitles.

Extras - There are quite a few extras on the DVD.  Commentary With Hadas Yaron And Rama Burshtein, a commentary companion to the film from the lead and the director.  Writer's Bloc Q&A With Director Rama Burshtein, a seventeen-minute long interview & forum with the lead and the director.  There is also a theatrical trailer for the film, as well as previews for Austenland, Blue Jasmine, The Gatekeepers, Amour, Chicken with Plums, and Footnote. 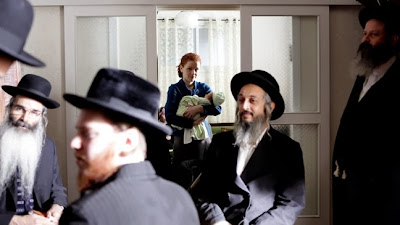 Recommended.  This was a movie that I found myself enjoying more & more the longer I watched it.  It was clean, honest, and beautiful.  It wasn't amazing, but it was a solid piece of cinema that had a strong message and was well-delivered.  The video was very good, the audio was fine, and there were many extras on the disc.  An deep and understated film, one that should be seen.