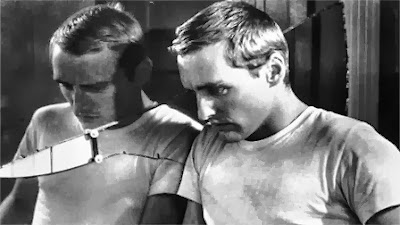 
I first knew Dennis Hopper from Hoosiers, the drunk father with a good heart.  And then, for some reason, my family was forever saying "Choo Choo baby!", straight from those Nike commercials in the 90s.  It wasn't until later that I saw more of Hopper's films and began to appreciate him as an actor: Cool Hand Luke, True Grit, Super Mario Bros., Speed, Waterworld, Land of the Dead.  Some of those are pretty bad movies, but he always has a certain flair, a strange charm or likability that is hard to deny.  I had never heard of Night Tide; it's a good bit before my time & not quite my style.  But when I saw that it was one of Dennis Hopper's first films, I was excited to see him at such a young age.  So I expected to like him, but I did not expect to love this movie; a wonderfully surprising piece of cinema that I'm very glad I watched. 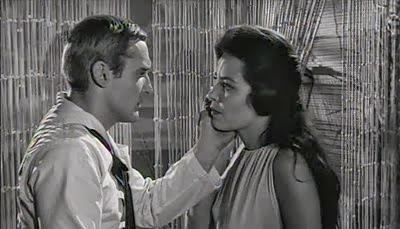 The story revolves around a young man named Johnny Drake.  Johnny is fresh out of Denver, Colorado, a place he always longed to escape from.  Having no father, he was always close to his mother and therefor tied down to his home.  But after her death, he decided to see the world, and what better way to do that than to join the Navy.  So Johnny heads out and the first "exotic" place he takes leave in is California.  At a carnival on the pier he stops in at a local club and there sees the woman who will change his life.  Her name is Mora.  She is a Greek beauty, dark hair, enchanting accent, and Johnny is immediately taken by her.  They begin a budding romance, walking the beach together and enjoying the time they have.  All is going swimmingly, until dark secrets begin to emerge and Johnny finds that he is in over his head.

Mora is the star attractive at a sideshow in the carnival.  She plays a captured mermaid, lying under glass & supposedly under water, posing for passersby to see for twenty-five cents a peak.  It's an honest living and Mora seems to love her job, the sea, the moon, all things ocean, but soon rumors begin to reach Johnny's ears.  Captain Murdock, the owner of the show, tells him that he is in danger, that Mora is not what she appears to be, that her life is shrouded in mystery and horror.  And at the same time, a local girl named Ellen shares with Johnny that Mora has a sordid dating history, that the men she is seen with mysteriously disappear.  Poor young, naive Johnny doesn't know what to do with all of this information, and only one truth guides his decisions: that he loves this beautiful & captivating girl.  As the couple become more entwined, their passion will lead to a stunning climax. 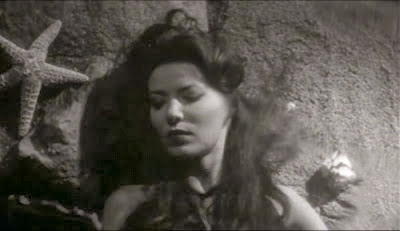 I find it hard to put my finger on just what exactly it is that I loved about this movie.  One of the main reasons would have to be Dennis Hopper and a role that seemed tailor-made for him.  Johnny is just such a romantic, so blind to the danger that he is in, so willing to open his heart to someone that he barely even knows.  And Hopper plays the part so well, creating a character that is lovably dumb and totally believable.  Love does strange things, and Johnny is a perfect example of that, perfectly captured by a great actor.  I don't think I've ever seen Hopper better than he was in this film, and at such a young age.  The side characters were just fine, and Linda Lawson was solid as Mora, but Hopper stole the show and really made the movie a study on young love, not the horror/mystery that it was advertised as being.

That said, the film did have a wonderfully creepy vibe throughout that kept me entirely interested and invested until the end.  I wouldn't call it a thriller or a horror movie, at least when compared with others in that genre, but it definitely had a great undertone of suspense & mystery that was engaging and fun to watch.  The strange music, the black & white, the rundown carnival; all the elements came together to create a mood that served as a cool backdrop for a good story.  Ultimately, that story became the focal point and the relationship between Johnny & Mora became what was important, but the vibe, the unease, was always present and always keeping audiences on the edges of their seats.  There might not have been much blood or death, but it wasn't really needed, as no cheap tricks were needed to hide the flaws; there just weren't many.

OK, there were some.  Apart from Hopper & Lawson the acting was pretty bad.  The merry-go-round operator, the detective, the fortune-teller; all roles that were fairly unnecessary and done quite poorly.  Luckily, most of the movie featured intimate scenes between Johnny & Mora, so the bad side acting didn't detract too much from the film, especially if you remembered what year this movie was made in and gave it a little slack.  A little overacting here & there doesn't bother me if it's done for dramatic effect and done infrequently, and I thought the director reined in a plot that could have gotten out of hand had it been let to run wild.  But it stayed solid, the acting was nice, and the suspenseful story played out perfectly.  Night Tide is a great movie with a great feel that is hard to define.  Hopper brought a nice character to the film and added another level to what could have been just another mystery movie but was so much more. 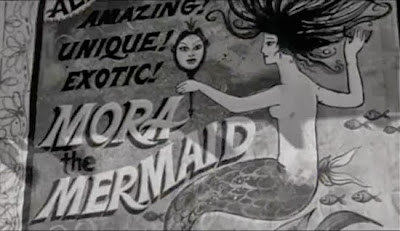 Video - With as aspect ratio of 1.66:1, the video quality is what you'd expect from a film from the 60s that was restored from its original 35mm format.  The film is in black & white, and there are often times that the picture is darker than it ought to be, making some scenes hard to see.  Again, understanding the time period helps accept the slight flaws, but it's not a horrible picture.

Audio - The sound for the film was done in Mono and isn't wonderful.  There are many moments when the background music is too loud and the speech of the characters is too low.  On the DVD there is one audio option; a feature-length commentary by Dennis Hopper & Curtis Harrington.

Extras - There are a couple extras on the disc.  Curtis Harrington Interviews is a section that has two episodes of interviews done for a public access series called "Sinister Image": Program 1 & Program 2.  Also, there are three trailers: Night Tide, The Stranger, and White Zombie. 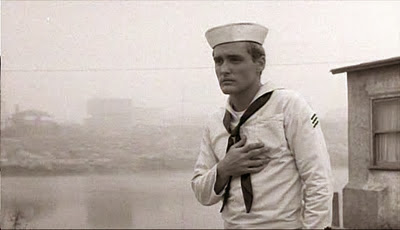 Highly Recommended.  Night Tide delivers a feeling that is hard to capture combined with a wonderful performance from a young & talented actor.  It's creepy, heartfelt, and mysterious; a very enjoyable film that will surprise you.  The video was fine for a restoration, the audio was good as well but for a few flaws, and you get a couple of extras on the disc.  Overall, a hidden gem of a film & one that should please both movie-buffs and the passing fan.