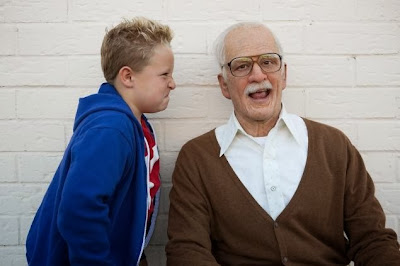 
If you were a teenager in the early 2000s and you watched a little MTV you probably remember Jackass.  It was a ridiculous show in which idiots did stupid things, but for some reason it was wonderful.  Maybe it was the cast, a bunch of buddies that enjoyed hurting themselves and making unsuspecting passersby extremely uncomfortable: Bam Margera, Ryan Dunn, Chris Pontius, Steve-O, Wee Man, and of course Johnny Knoxville.  The TV show would spawn a few movies and launch Knoxville into semi-stardom, eventually leading to Bad Grandpa, a Jackassesque film that is a fake movie and a reality show all rolled into one.  It may not have the wild stunts that the original program had and it doesn't star the old gang, but the Candid Camera feel is still alive, the gross-out factor is still high, and there's a bit of magic left.

Surprisingly there's a tiny story that flows throughout the movie, even though most of the participants don't know they're on camera.  Knoxville plays Irving, a dirty old man whose wife has just died.  Free at last, he plans to make the most out of what life is left to him, but there's a complication.  His crackhead daughter is on her way to jail, leaving behind a boy who needs shipped to his father.  Irving grudgingly takes his grandson Billy on a wild road trip across the country in order to get him off his hands once & for all.  But he never suspected that this little man might be a perfect partner in crime; helping him to steal food, hit on girls, carry bodies, win money, and ultimately enjoy a grandpa/grandson relationship that neither of them had ever known.  When they reach their destination, they will have a tough decision to make; do they go their separate, boring ways or return to their hell-raising, bond-forming adventure. 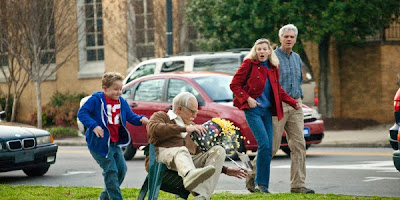 If you were a fan of Jackass chances are you'll enjoy Bad Grandpa.  It's not exactly the same, as there's a lot less physical injury and a lot more fake-out.  But the heart of the pranks remain the same; feces-flying, balls-swinging, curses-shouting fun that is intended to shock, entertain, and generally amuse the people making the show even more that audiences.  That's one thing that makes these guys great; they're doing this for themselves and they're having a great time.  There's something contagious in the fun they're having that makes you laugh along, even when you feel embarrassed & uncomfortable.  And there are a lot of those moments, times when you wish you could turn away because you feel so bad for the unsuspecting victims, but you just can't.  No one gets harmed in what is ultimately good natured humor, but I sure wouldn't have wanted to be in the dark when some old man and his brat destroyed my friends' wedding or asked me to put a corpse in a car trunk.

The movie itself was so-so, though they weren't out to win any Oscars.  Knoxville was solid as Irving and Nicoll was pretty convincing as Billy, but neither of them are amazing actors.  They come off as guys doing a good job keeping a straight face in comedic situations, which is exactly what they were.  The film was funny throughout, but there were not many moments when I lost it or thought it was incredibly hilarious.  I laughed a lot, so they got me, but it was more continuous chuckling then a ton of laughing out loud.  They kept the movie short, which was important, because the jokes started to get a little old by the end and there wasn't much left to be done or said.  The horny grandpa & potty-mouthed kid routine worked, but I was ready for them to be done just in time for the end.  And at the end there were some great outtakes, which actually made the movie a little better, making me feel like I was in on the joke and not being tricked by it.  All in all a funny film that's not going to be on my list of top comedies, but one that I enjoyed & would recommend, if with care. 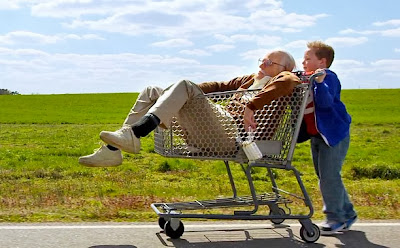