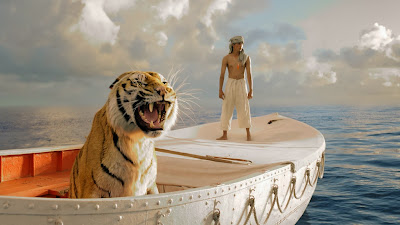 
You know a movie is good when you're still thinking about it the next day, when you're still trying to figure out how it made you feel and what exactly happened.  Life of Pi is that type of film.  It leaves you questioning, wondering, thinking about what each scene meant, what the greater meaning was.  Because this story is actually two tales in one; a believable adventure in which a boy survives against all odds and a fantastic journey that defies logic.  Which version you believe depends on your point of view, making Life of Pi the ultimate conversation piece.  I've already changed my mind a couple times, trying to wrap it around the idea that the "truth" might not be the important part of the message, that the voyage itself is what matters, not the details of the retelling.

Pi is a young man from India.  He grew up with an insatiable curiosity and a quest for knowledge.  Having been raised in a family where his mother was a Hindu botanist and his father a scientific-minded businessman, Pi was open to all ideas, religions, and lifestyles.  His ultimate quest was to find God in the world, discover the divinity behind nature and religious practice, to find what unites us all.  His journey begins, but under horrible circumstances.  His family owns a zoo, but must sell it in America and move themselves to Canada.  So the family and the animals are on a cargo ship crossing the Pacific when disaster strikes and the boat goes down.  Only Pi escapes, accompanied by four animals; a zebra, an orangutan, a hyena, and a tiger.  The fierce tiger, Richard Parker, becomes Pi's sole companion and his reason for surviving, as the pair struggle to eat, to drink, to live, and ultimately to reach civilization once again.

There is almost too much to get into, too much to talk about.  I'll begin by saying that you should watch this movie.  The visuals are worth it by themselves.  It is a beautiful film, with shot after shot of amazing scenery and stunning seascapes.  That alone is a reason to physically see it; it will be one of the most visually stunning movies that you've ever seen.  But the story is what really makes the film great.  It's so interesting, so up for discussion, so ripe with allegory and allusion.  And there is so much being said about religion, beliefs, myths that I want to watch it again right now just to see what I might have missed.  Life of Pi is one of those movies that is a little bit more than just that; it's a piece of art that can be interpreted many ways, that can be talked about by everyone, and that can mean something different to every person who sees it.  Whether you take the story of the film literally, figuratively, or as a mixture of both, this is a must-see film, deserving of its accolades.  Watch it and then talk to me about it; I'm going to to be thinking about this one for a while.