Movie Review - Kiss of the Damned 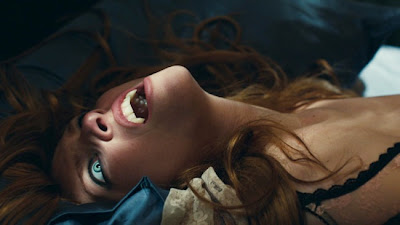 
I'll preface my review by admitting that I'm not into vampire movies.  I'm a zombie guy.  I like the ridiculous, gory, entertaining plots and the way that zombie movies can be made very low budget and still come across as fun.  Vampire movies always feel so elitist by comparison.  They're so European and over-dramatic, filled with pale socialites feasting on the blood of mere mortals.  I had hopes that Kiss of the Damned would be a little bit more; sexier, grittier, more realistic maybe.  But it turned out to be the same as all the other good vampire movies; not stupid, not amateur, but definitely not something that will get me to switch genres.

The main vampire in this film is Djuna.  She is a sophisticated humanitarian and doesn't kill people.  She lives a life of seclusion, supported by wealthy vampires and their loyal staff of servants.  Her existence is simple, until the arrival of two catalytic individuals.  One is Paolo, an extremely handsome writer who immediately falls for Djuna.  The other is Mimi, her sister, a volatile vampire who can't be controlled or predicted.  Djuna & Paolo are falling in love and giving their lives to each other, but meanwhile Mimi is upsetting the delicate balance of the relationship.  Events begin to spiral out of control, and yet Djuna cannot stop her evil sister, cannot escape the games that she plays so flippantly and so violently.

I guess for a vampire movie it was all right.  The characters were pretty interesting, the plot was quick-moving and fairly cool.  But to hook me in there needed to be more.  Some extra sex, some extra blood, a little more realism and a little less trashy novel.  It started out OK, with good driving music and a creepy feel.  But once the lovers met & instantly couldn't live without each other, the story starting to lose me and I stopped being interested in the posh parties they were attending.  I could see how this movie could appeal to people, but it wasn't what I wanted out of a horror movie.  And perhaps that was the problem; it was horror/romance, which is not my thing.  I could have gotten on board if there had been better acting perhaps, but I was going to be a hard sell from the beginning and unfortunately I was never sold.