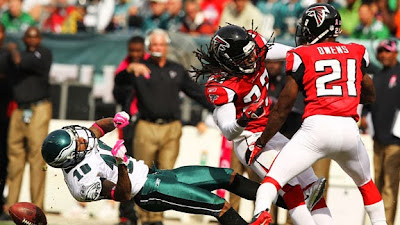 I'm tired of listening to the debate about the physicality of football and the safety of the players.  It seems like there are only two extremes when it comes to opinions on the subject; either the NFL is being too overbearing & they're taking away the spirit of the game by making too many rules, or else they're hiding concussion facts & throwing these players into the meat grinder with no regard for their health.  Helmet-to-helmet hits are against the rules, shots at the knees will soon be illegal as well, defensive backs are having a tough time knowing where to strike, and penalties & fines are being doled out in generous amounts.  But all of this is being done in the spirit of player safety, so where is the middle ground between the brutal nature of the sport and the health of those playing it?

The answer is simple and it's called tackling.  Forget pad-level change, helmets sliding up the chest accidentally, a wide receiver dropping his head to brace for impact.  These things are unavoidable and will occur at some point.  But tackling properly can completely eliminate this debate.  How often do you hear the term 'hit' during a football game?  He hit the quarterback, he hit the defenseless receiver, nice hit.  Why in the world is anyone hitting anyone?  You're supposed to tackle them!  The purpose of a defensive player is to stop the offensive movement of the football by either preventing the receiver from catching the ball without contact, tackling the runner, or sacking the QB.  Hitting is never part of the job description.  Injuries occur and this topic becomes relevant only when defensive players hit the offensive players, often closing their eyes, lowering their head and shoulders, and throwing their bodies at another human.  That's just bad football.

How often do we see missed tackles because a DB smacked into a WR and didn't wrap up?  Tackling is the only way to take a player to the ground effectively.  As fans we should want our players to tackle, not hit, to be sure that they are doing their job, not just looking cool on TV.  And when you tackle properly your head is up, your eyes are on the target, you meet the player at the middle of their body, and you take them to the ground.  That eliminates head shots, knees shots, you getting a concussion, them tearing a muscle.  It seems so simple it's amazing to me that coaches can't impress this upon their players; good form tackling is not only the key to avoiding injuries but it is also a more effective way of stopping an offensive player.

To give some credit to the NFL, they are working alongside USA Football and its Heads Up Tackling program to try to teach young players the proper techniques in tackling to avoid injuries to both sides and to make the game more fundamentally sound.  So maybe in 10 years we'll have a wave of football players who actually know how to tackle someone, not just light them up.  We need a culture change in the NFL, one the shifts the focus from highlight hits to better overall play.  As fans we're highly responsible for this, as we're the ones cheering the "blow-em-up" hits.  What we need to cheer are the good tackles, the smart plays, the intelligent coaches that make this game excellent, not the big blows that can get us excited but can also negatively effect the careers of the players who we love to watch.  If we want this game to be around a long time and to be played at a high level, we need to encourage great tackling, the gray area between the black & white of physical play & player safety.
Posted by Olie Coen at 11:07 AM