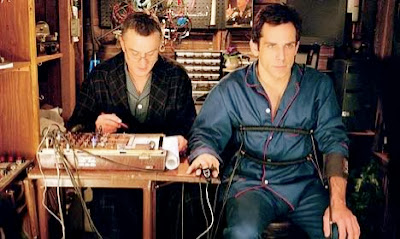 
Some people really don't like Ben Stiller, and I get that.  He's done some really dumb movies, ones that deserve your ire.  Duplex, Along Came Polly, The Heartbreak Kid; all very bad films.  But Meet the Parents isn't one of them.  If you're not a fan of Stiller because you didn't like There's Something About Mary, then you've got to give this one a chance.  Every once in a while a cast just clicks, the chemistry between a duo just works, and the movie becomes an unexpected success because of it.  That's what happened here.  This isn't your typical stupid Stiller comedy complete with semen jokes.  This is something more, a very honest & hilarious movie that features one phenomenal actor who loosened up and one passable comedian who elevated his game & toned down the dumb.  Films like this don't come along every day and they deserve a leap of faith.

Gaylord "Greg" Focker is a man on a mission and what he wants is simple; for his future in-laws to like him.  He is planning to propose to his live-in girlfriend Pam but has to put it on hold when her sister suddenly announces her own wedding.  So heading to the Byrnes household for the weekend might not be the perfect place to pop the question, but it will give Greg the opportunity to meet the parents & to win them over.  The problem is Jack, Pam's over-protective father.  Before Greg gets his blessing he must prove that he is deserving of joining the Byrnes family "Circle of Trust", whatever that might entail.  And as events outpace the well-meaning Greg, he begins to dig himself deeper & deeper into the shit; spray painting a cat, catching the house of fire, discussing breast pumps, and generally making an ass out of himself when all he wants to do is survive the weekend and win the approval of his future family.

Rarely has a movie been more quotable than Meet the Parents.  Line after perfect line fall into place & get stuck in your head for days.  Yes, some of the humor is physical, but the funniest parts of this movie are deep within the dialogue, especially between Greg & Jack, two men that both mean well but never quite say the right thing.  Am I saying that a Ben Stiller movie is witty?  Yes, yes I am.  You've got to give it a shot in order to see it, but what you'll get is comedy that's unlike his other films, humor that goes above dumb jokes and becomes movie line history.  And the script aside, the actors deliver excellent performances, ones that are obvious stretches but are pulled off beautifully.  Stiller & De Niro are the perfect pair, feeding off each other & literally making audiences uncomfortable with the believability of the situation.  A comedy unlike any others, Meet the Parents is worth your time, worth your laughter, and will be one of the most memorable movies you're likely to see.