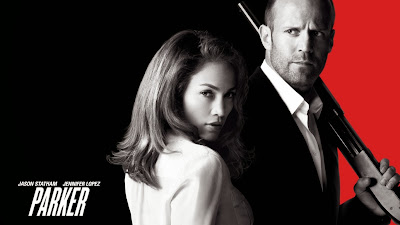 
Oh, the good old days when Jason Statham was a cool, unknown English actor.  A lot of us remember him from his gritty days, when he was Bacon in Lock, Stock & Turkish in Snatch.  Since then he's moved up in the world, but his movie selection has definitely taken a step down.  Now he does films like The Transporter, Crank, Death Race, The Expendables, Killer Elite; action-packed, bloody crime thrillers that are just about as good as their titles make them sound.  He found his niche I guess and his movies are pretty popular, but man are they bad.  Parker is no different, a heist movie where calling the acting secondary to the action would actually be a compliment.  There is little acting visible in this film, and what you do get is some of the worst you'll see.

Parker is a thief, if one with a strange set of moral codes.  He keeps his word, he's nice to the people he robs, and he never ever double-crosses.  Unfortunately, that doesn't keep him from being shot & left for dead by his fellow burglars.  They made a mistake though; they didn't kill him.  Now Parker is out for revenge, with a plan to get his money back & kill his enemies.  But he can't do it alone.  A big job is going down in Florida and Parker will be there to get his revenge with the help of a realtor named Leslie who knows the lay of the land and can help him out.  Parker must survive hit men that are after him & evade the police long enough to let his old friends steal their loot, take it from them, and murder every one.  Only then will he be at peace & be able to get on with his once orderly life.

Not good.  Not good at all.  Jason Statham spend exactly no time acting during the movie.  He was just walking around looking rugged, getting beat up, making eyes at Jennifer Lopez, and shooting people.  They could have hired a stunt man, never shown his face, and saved a lot of money.  And J-Lo didn't add anything.  She was very bad; over-acting and under-talented.  There was nothing great about the movie whatsoever.  The plot was OK; I liked the clever ways they stole money, the costumes they wore to pretend to be someone else.  Fun, fine, whatever.  But there has got to be more to the story to get me hooked, and Jason Statham's love triangle wasn't it.  In the end, it was just another crappy action flick that didn't even have a bunch of cool scenes that made you forget about how bad the actors were.  I'd like to go back in time and pass on Parker; watching it was a poor decision.