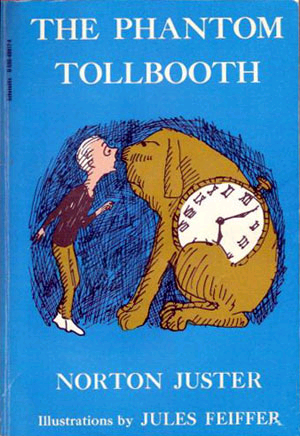 
When I was young, my sister & I would watch the movie version of this novel as often as we could.  We'd borrow the VHS from the library, keep it for a week or two, and have a ball.  It was a strange film, filled with 70s psychedelia, hand-drawn animation, and characters that made little to no sense.  There were greater points being made than my young mind could wrap around, but I enjoyed the story nonetheless.  Now, as an adult reading to my children, I appreciated the plot on another level, understanding more of the intricacies than I did the first time around.  It was nice to read the actual text after all these years, and my kids had fun with the whimsical story, the colorful characters, and the weirdness that is The Phantom Tollbooth.

Milo is a pretty boring boy.  He doesn't love anything, can't get up the energy to get excited about anything, and wonders what the point is of doing literally anything.  His world consists of the daily activities he must do just to live, nothing else, with no room to actually turn his head to notice anything that could potentially be interesting.  Until, one day, Milo receives a large package.  It's addressed to him, although it's not his birthday, and when he opens it he discoverers a very odd present.  Inside is a tiny tollbooth, complete with a small car and change to pay your way.  When Milo gets in the car and drives through, he finds himself transported to a strange world, one in which nothing is as it seems.  A dog who functions as a clock, a spelling bee who buzzes words, a doctor of sound, a conductor who orchestrates sunrises, a king who mines numbers from caves; the list of extraordinary characters goes on & on.  Milo must try to make sense of it all and rescue the princesses of rhyme & reason if he is to put this chaotic land back in order and get himself back to a life that might not be so boring anymore.

It's quite a trippy ride, an adventure akin to Alice in Wonderland.  There are a lot of random oddities, nonsensical conversations, and puns galore.  It makes only a little sense, but then that's not really the point.  As a kid I enjoyed the funny & wild story, but as an adult I enjoyed it for other reasons.  Milo's journey is one through academia, visiting Dictionopolis, Digitopolis, the Valley of Sound, the Mountains of Ignorance, the Doldrums.  The land is presented as an example of what knowledge can do, what one can learn if any effort is made, what mistakes one can make if wearing blinders through a colorful world.  In the story, Rhyme & Reason being gone has turned the world upside down, so things are a little confused, but that only aides in making the lessons of the book stand out; knowledge over ignorance, the importance of balance, exposure to different studies.  It's an interesting book from an adult's perspective, an enjoyable one from a child's.  But either way, a fun read, a good story, and a fascinating viewpoint.