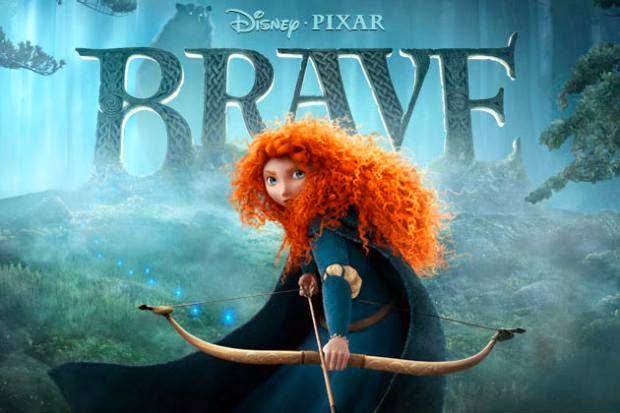 
Braveheart and then Brave; I'm enjoying movies about courageous Scottish people right now apparently.  It must be the accents, they get me every time.  And the swords.  And the giant redheads.  Anyway, Scottish history is fascinating, as is Scottish myth.  Whether it be fictional, actual, or mythical, the legends and the land are ripe with stories, tales of daring & adventure that seem tailor-made for the screen.  Braveheart is a phenomenal movie, an entertaining masterpiece, a story well-told.  And Brave isn't far behind it.  It's just one more excellent Pixar film, perhaps not one that was loved by children everywhere, but definitely one that won my heart and gained my respect as a solid bit of animation.  It had a moral to impart, a tale to weave, and it didn't waste time with frills in getting the message across, something I appreciate more than I can put into words.

Princess Merida is an unlikely hero.  She can't even control her own life, let alone set out on any adventures.  Her mother is grooming her to be a future queen, but Merida would rather ride around on her horse & shoot her bow than dress up in a fancy gown and sit still.  Her father understands, he's a beast of a man with a kind heart, a bear-fighter and an honest king.  Merida is more like him than her mother, and when Elinor tries to force her daughter to choose a husband she may have pushed her daughter too far.  Merida buys a curse that will change her mother, but she never imagined into what.  So when Elinor transforms into a bear and her own husband drives her off, Merida knows that it's up to her to fix the family that she has torn apart.  She must seek a solution, brave all dangers, and actually get to know her mother, as she tries to right the wrong and change her own fate.

That's the moral really, taking your life into your own hands and changing its direction if you don't like the course it's on.  That and getting along with your mom.  But those are really the key messages and the main story lines.  As opposed to Frozen, which I like more every time I watch it FYI, Brave stays simple and therefor stays relevant.  It's not overly complicated and I appreciated that it allowed for one point to be made well.  It doesn't have the musical numbers that other Disney movies have, but it does have a nice background score and great mood music, heightening the feeling that you've been transported to ancient Scotland, or at least a fairy tale land that's very similar.  The voice-overs are excellent, the action is very cool, and the animation is perfection.  It's a beautiful movie that is as enjoyable to view as it is to watch, a story that's simple & clean, a film that speaks strongly & clearly.  If you like Disney/Pixar you'll like Brave.  It may not be your standard princess tale or the greatest feat in computer animation, but it takes from both worlds and creates a story that's one of the more pleasant & entertaining you're likely to see.