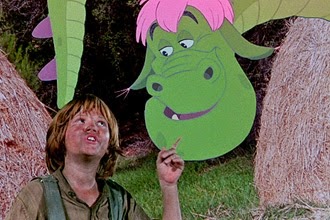 
I love old school Disney and I still have a ton of VHS tapes that I watch with my kids.  Yes they keep making great films, but nothing touches the classics of the 60s & 70s.  Mary Poppins, Bedknobs and Broomsticks; excellent early stuff from a company that just knows how to produce hits.  Unfortunately, Pete's Dragon doesn't hold up exactly the same.  If I had had to guess, I would have said that it was made in the 50s; it feels like a black & white musical that can't quite translate to today.  But it was released in 1977, thirteen years after Mary Poppins.  When you look at it that way, excuses fly out the window and you're left wondering why a movie made in that era by those people isn't better.  I guess not every Disney movie can be a hit, and it's not like Pete's Dragon is a complete failure.  But it's definitely one of the weaker you'll see, for a good many reasons.

Pete is an orphan boy who's having a hard time.  The family that bought him for $50 has always treated him terribly, and after many attempts to run away it seems as if he's finally succeeded.  Well, it helps when you've got an invisible giant dragon knocking people out of the way whenever it's necessary.  Elliot is Pete's constant companion, there to help him however he might need it, whether that's roasting apples with fire or taking him on a little flight.  But it's hard to be inconspicuous when you're a big green dragon and when Pete tries to make a new start in a new town Elliot accidentally makes a lot of trouble.  Living in a cave down by the ocean, the duo meets Nora and her father Lampie, the operators of a nearby lamp house and a pair of friends who might just offer Pete something he's never really had; a home.

It's a fun story, a boy & his dragon, and it's great what they could do with an invisible Elliot on the set of the movie.  The music is good too, catchy songs mixed with heartfelt, creating a backdrop for a pretty engaging story.  But there are also some problems.  The acting wasn't very good from either Pete or Nora, a big issue since they're the leads.  They could sing, in fact Helen Reddy was famous for her voice, but acting talent was not in ready supply.  The film felt like a play, which I guess was pretty cool, but it also felt like it was made in the 40s.  By 1977 they should have been able to do more with this film, polish it up, create a more dynamic movie, generally do a better job.  It felt amateur throughout and Disney was by no means amateur at that time.  Pete's Dragon is more of a sideshow than a main event, failing to blossom as the musical it could have been.  It's still enjoyable after all these years, but nowhere near as good as so many that came before & after.