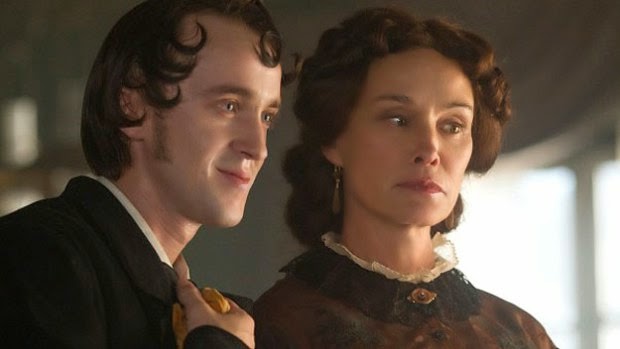 
This was a case of the actors in the film intriguing me enough to watch something that I most likely would not have otherwise.  Elizabeth Olsen, sister of the famous Olsen Twins, has burst onto the scene since 2011 with roles in Silent House, Martha Marcy May Marlene, Kill Your Darlings, Very Good Girls, Oldboy, and Godzilla.  Oscar Isaac won me over with Inside Llewyn Davis, if not so much with Drive.  Jessica Lange is a veteran of course; I'll always remember her in King Kong.  And Tom Felton is really only known for one thing, that being Draco Malfoy, the nemesis of Harry Potter in that incredibly successful series.  Putting these four actors together in a film was enough to catch my attention, even if I had reservations about them all playing middle class French of the 1860s.  And that's where the trouble did turn up, as they all were fine individually as their own characters, but as a whole the movie felt forced and stiff, a bad backdrop for good actors. 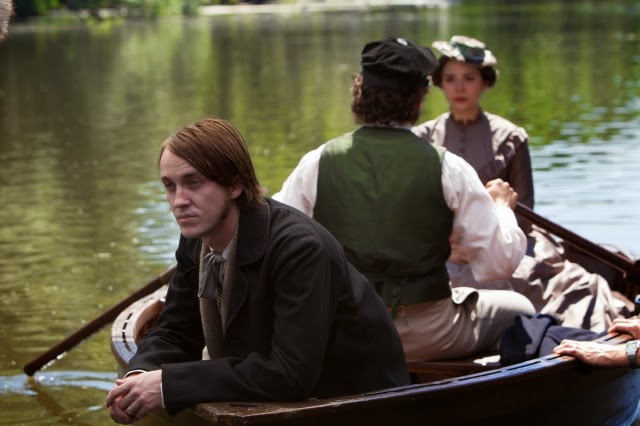 This is the story of Therese, a young girl forced into a life she never imagined.  Without a mother, and with her father abandoning her with the hollow promise to return, Therese is left to live with an aunt & cousin.  They treat her well, but with the constant knowledge that she is a burden, a boarder, someone who must be appreciative and dutiful.  That duty extends to marrying her cousin Camille when they both come of age, a sickly young man who Therese has always been a nursemaid to, a caretaker who shares no love.  But marry him she does, and when he takes a job in Paris, Therese and his mother set up a small shop that will become their daily lives.  Routine and responsibility, that is her new life, and yet she longs for something more; for love, for passion, for romance, for sex, for fulfillment, for anything beyond the dreary walls of the shop, outside the cold touch of a husband she has never wanted.

Enter Laurent, Camille's handsome friend who comes weekly to play dominoes, the only partially exciting event of the entire week.  Therese immediately falls for him, his brooding good looks, and his artistic manner.  The two begin an affair that will endanger the structure of their lives, yet becomes the only thing they each have to live for.  They love one another, but they are trapped, Camille ignorantly standing in the way of their happiness.  But what if he should disappear, fall ill, have an accident; after all, people die every day in strange ways, why not Camille?  And so the wildly unpredictable couple contemplates murder, battling with the choice between a hidden love affair and a public relationship, wondering if they could go through with such an act and whether or not they would ever be found out.  Therese & Laurent, Camille & Madame; four players on a great and dramatic stage, with all their lives in the balance. 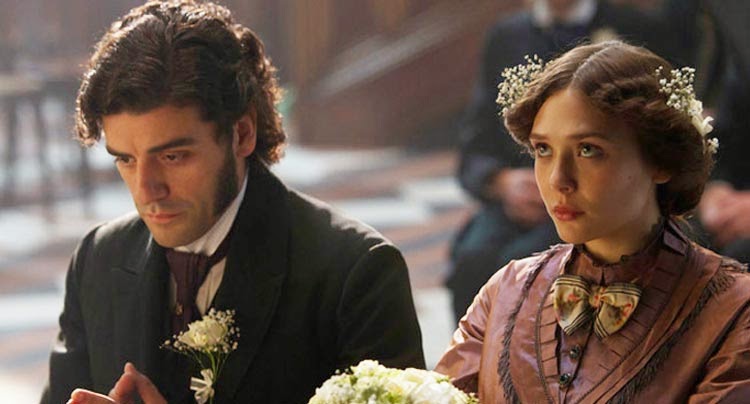 Again, the acting wasn't the problem.  That's what I look for in a film beyond anything else, quality acting, and if I get that I'm willing to forgive a good deal.  Every character here was well-developed and thought out, with a strong actor behind it.  Tom Felton was solid as Camille, playing the dim & grim husband to perfection.  Jessica Lange was equally formidable as his mother, the cold hearted head of the household who loved only her son.  Oscar Isaac as Laurent was the handsome home wrecker you'd imagine, a dark & moody man who swept the ladies off their collective feet.  And Elizabeth Olsen did a fine job as the main character, the young woman trying to fulfill her needs, trying to find love in a dreary world.  She might actually have been the weakest of the crew, attempting a pseudo-British accent for some reason, often failing to live up to the moment.  As a hungry housewife she was great, but when it came to more dramatic work she fell a little short.

The same could be said for the film as a whole.  When it focused on sexuality and the virtual imprisonment of women during this era the movie was spot on.  You could feel the tension, the desire to break free, the loneliness of a loveless marriage.  But when deeper themes were presented the story took a turn for the weak.  All the anger & drama of the second half of the film felt a little pushed, a little college theatre, and left me thinking that I'd rather just go back and watch the first half over again.  Either the director didn't have the chops to pull off the darker side of the story or the actors didn't, because someone failed to continue what started so well and see it to the end.  The plot is based on an 1867 classic and always feels very true to that time, but I almost wish they'd gone off the script a bit and taken the finale of the film in a different direction.  What started as a slightly erotic thriller became just another dull drama, and I think that could have been avoided.  After all, the talent was there to pull it off and the beginning of the story was great, it just didn't finish well. 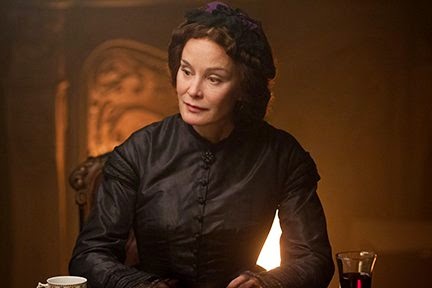 Video - With an aspect ratio of 2.40:1 (16x9 Widescreen), the video is really excellent.  The film was shot using an Arri Alexa Plus camera and exhibits a very crisp image.  The picture quality is very high, with clean & balanced shots.  The film does tend to be a bit dark, making indoor night scenes hard to decipher, but that's the only visual flaw of the film.

Audio - The only audio option on the disc is English 5.1 Dolby Digital.  There is also the choice between English or Spanish subtitles.  The sound quality of the film was quite good, with a nice balance between dialogue and music.  The background themes created a dramatic atmosphere and added to the mood of the film.

Extras - Commentary can be played along with the move, with director Charlie Stratton and producers Mickey Liddell & Pete Shilaimon.  There are three very short deletes scenes.  And there are also three trailers: Thanks For Sharing, Gloria, and Flowers in the Attic. 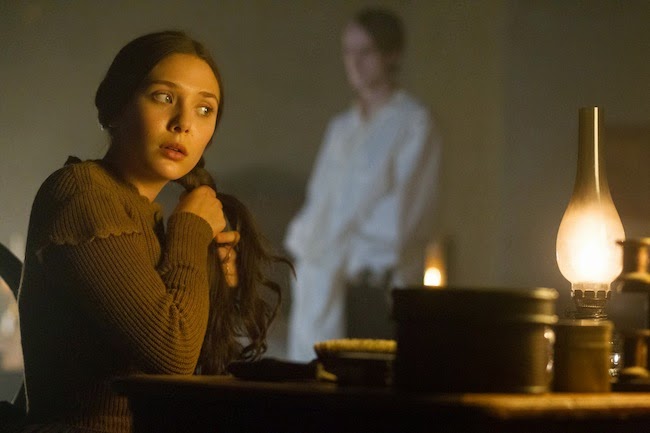 Rent It.  In Secret is a film that is better in parts than as a whole.  The actors that make up the cast are all solid, each playing their part well.  And the beginning of the story is very fascinating, a look at life at this particular time.  But by the end the plot drags, the mood darkens, and the script loses its way.  It's a fine movie that doesn't impress, a film that will only disappoint if you're looking for greatness.  The video quality is excellent, the sound strong, and there are a few extras on the DVD.  But taken in its entirety, the film lacks punch and becomes a mediocre drama.