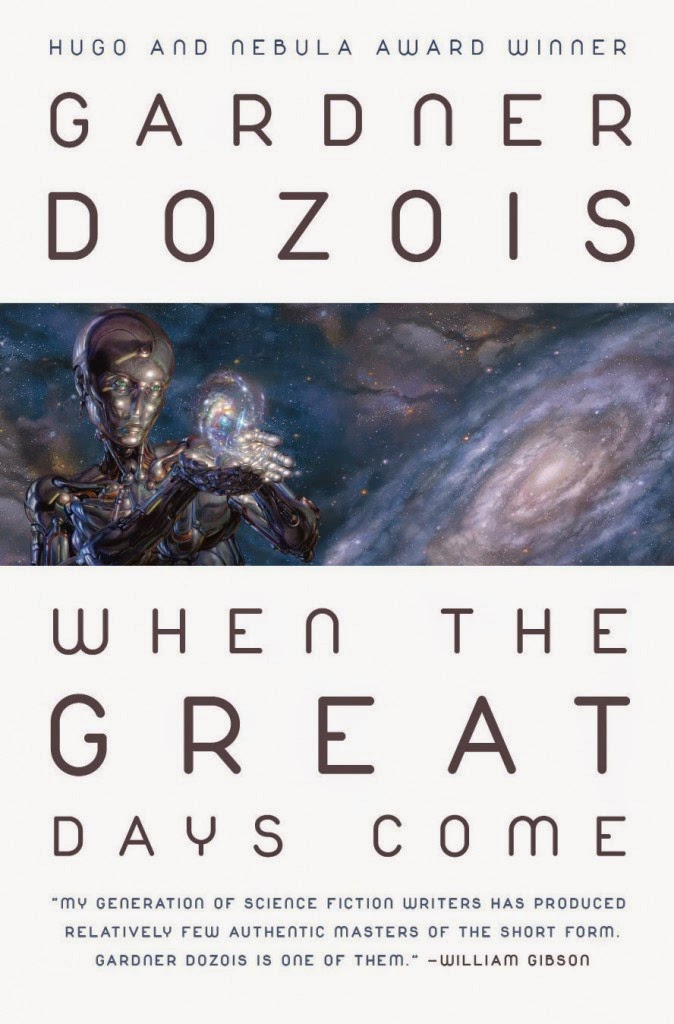 
Dozois is known more as an editor than as an author of fiction.  Since 1984 he has been editing The Year's Best Science Fiction anthologies and from 1984-2004 he was the editor of Asimov's Science Fiction magazine.  His genre is obviously sci-fi, as both his editing work and short fiction exemplify.  When the Great Days Come is a collection of his short stories, including many award winning entries.  He's a mix of Isaac Asimov and Stephen King, with a little historian thrown in, someone who may have read too many works by other writers, but still has some unique ideas that are worth our time to read.  His stories are part futuristic, part post-apocalyptic, part horror, part war, and they read as swift snapshots of an idea.  Dozois has the experience to put together a solid book of shorts, and does so here, drawing from his own work and showing us his own talent.

This collection spans decades, the oldest story published in 1971, the most recent in 2006.  It is a mix of alternate history, robotic science fiction, humorous fictional viewpoints, and portraits of life after disaster.  There are eighteen stories in all, ranging from very short to quite long, and broaching a number of subjects.  Counterfactual; a look at how the United States would differ had the Southern forces of the Civil War not surrendered so quietly.  When the Great Days Come; viewing humanity as an easily-replaced dominant life form.  The Peacemaker; a boy gives everything to stop the rising flood of the world's oceans.  Ancestral Voices; a horrific tale of a creature that lives on death.  A Special Kind of Morning; a futuristic war story that pits humans against the machines that rule the world.  A Knight of Ghosts and Shadows; humanity's last hope of survival may depend on leaving the planet that they've always called home.  So many stories with so much to say, about artificial intelligence, mankind's destructive tendencies, and a world that we may never understand.

What a fascinating collection of science fiction, written by one man but coming from so many different viewpoints.  There is a very wide narrative range in this book, a look at so many possible futures and all written in such a variety of styles.  Dozois channels Asimov very strongly in a few of his stories, bringing up the topic of a central AI, an all-powerful computer that has outpaced humanity.  Those stories were very strong; he knows his stuff and makes unbelievable futures believable.  My favorites were his futuristic tales, looks at how life might evolve beyond the point of human control: A Special Kind of Morning & A Knight of Ghosts and Shadows.  His alternate histories and stories from alternate perspectives with interesting, but not amazing.  And his horror smacked of Stephen King while paling in comparison.  All in all, a solid collective filled with a few excellent stories, the rest being very strong but not mind-blowing.  I would recommend this to any sci-fi fan, any Asimov fan, and to anyone who wants to stretch their range into the unknown.