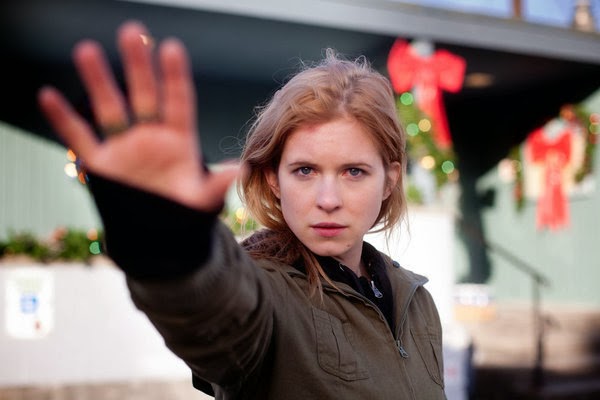 
You're pretty much only going to get one type of movie when it's produced by the Syfy channel, and no I wasn't going to say, "a sci-fi movie."  I was going to say crap, but that's a little harsh.  Because, yes, all the films on Syfy are kinda crappy; they're designed to be cheap, fast, simple, unbelievable.  But they're not all exactly bad.  Some have a lot of redeeming qualities that make you love them anyway; humor, imagination, a little farce, a lot of cheese.  And so it all depends on how it comes across.  Does it go the extra mile to become tongue-in-cheek or does it just waste ninety minutes of your life with ridiculous fantasy?  Well, thankfully 12 Disasters (aka The 12 Disasters of Christmas) is in the former category; a Syfy original that is, of course, terrible but is somehow also loveable & enjoyable despite the worst efforts of literally everyone involved. 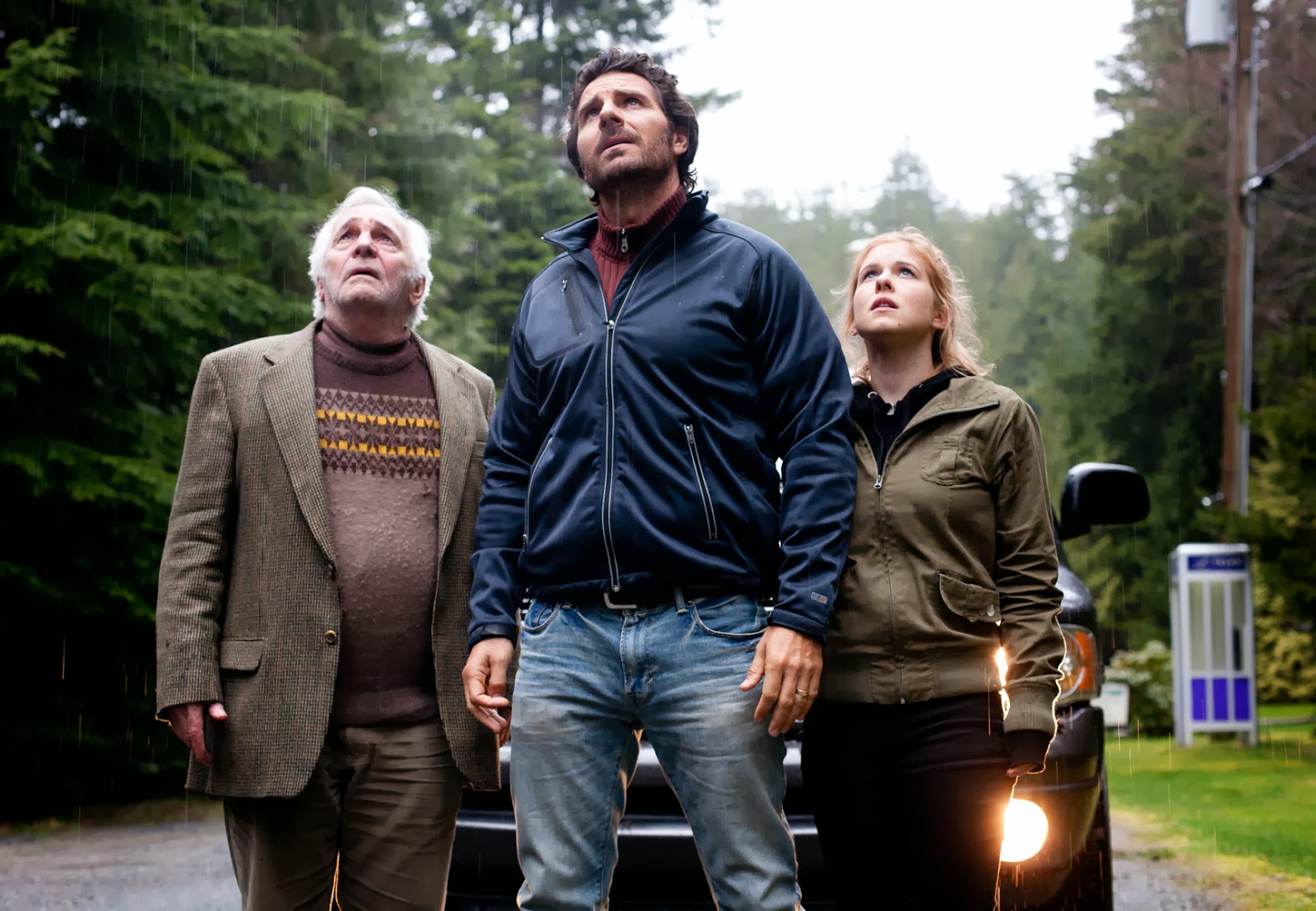 In the small town of Calvary life is good.  Yes, a few birds have mysteriously died and, yes, a giant corporation is moving in & kicking out all the mom'n'pops, but other than that things are nice.  And for Jacey, a young girl on the cusp of womanhood, the biggest problem in the world is which college to attend once she graduates.  But today is a good day; her birthday actually, with Christmas right around the corner.  It's a day for hiking & climbing with her dad, for enjoying her family back at home.  But here's where things start getting weird.  For when the water turns red and the weather starts acting funny, the people of Calvary start wondering if something is wrong.  And when Jacey's grandma hurriedly gives her a gold ring, one that may be magical, the idea that all is not well quickly becomes an obvious reality.

Apparently the world is ending and Jacey is the key to saving it.  Her grandma and a strange old man named Grant know the secret, but no one has ever believed them and they could hardly believe themselves.  But with strange occurrences happening more rapidly now, the truth has got to come out before it's too late.  Jacey, with the help of her family, must find four more gold rings, bring them together, and use her latent magical powers to stop the spread of these natural disasters.  But it won't be easy.  The land itself seems hell-bent on stopping her, the town of Calvary is completely isolated, and to make matters worse a man named Kane has made it his personal mission to kill Jacey and end the troubles himself.  Events move quickly as Jacey races against time to become the heroine that she is destined to be. 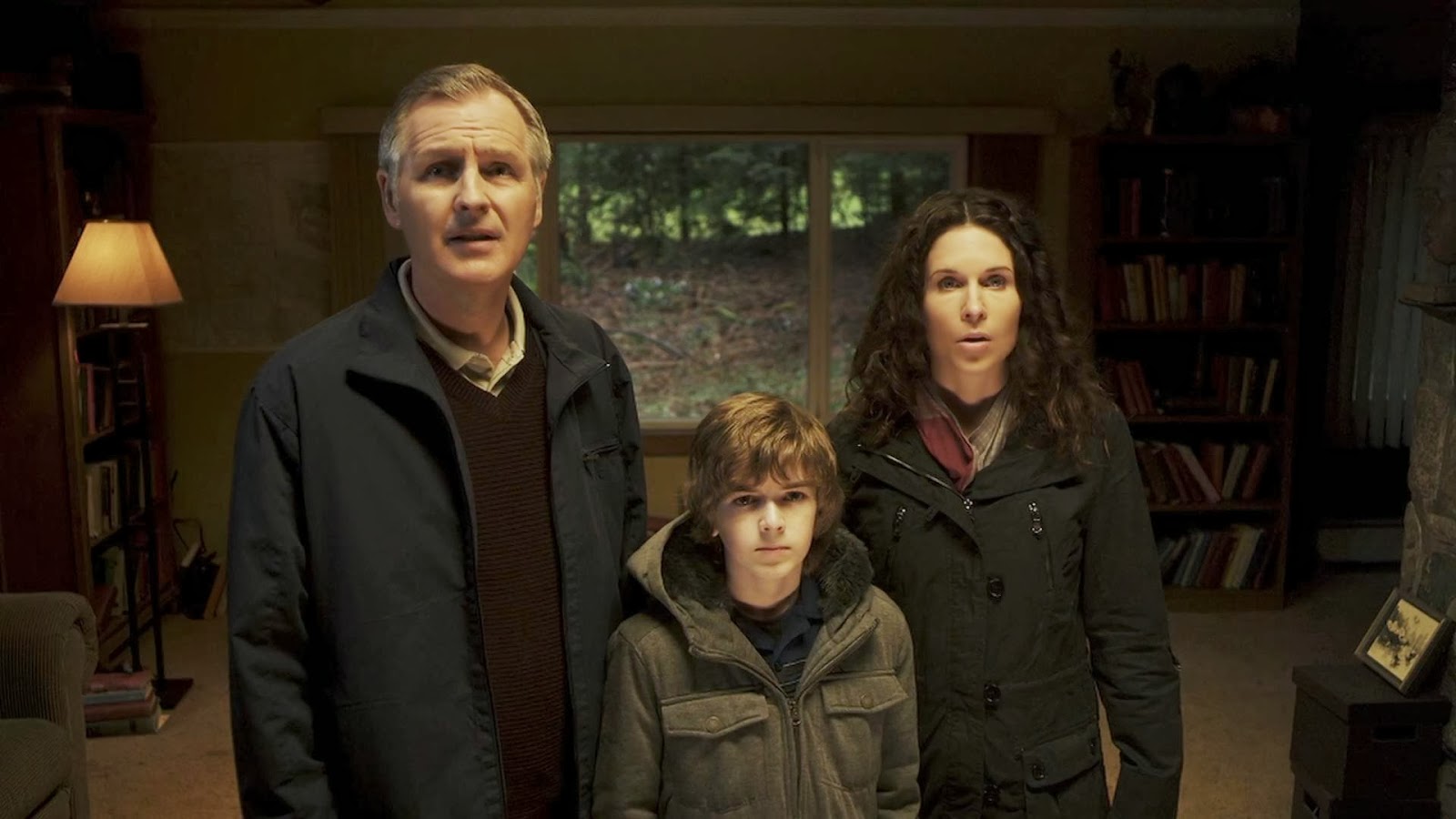 In order to enjoy this movie at all you've got to come in expecting something terrible.  You've got to know that it's a Syfy movie that can't swing big name actors, can't produce an incredible blockbuster, and can't really stop itself from being a little silly.  That's the nature of these movies.  They're badly acted, make basically no sense, and seem to be thought up on the spot.  I mean, it's a disaster movie that incorporates the partridge in a pear tree song into its plot and expects us not to laugh.  Of course we're going to laugh and of course this move was destined to be bad from the start.  It never really had a chance; all it could ever do was embrace the fact that it was going to be goofy and try to get us to like it anyway.

And that's exactly what it did.  Despite the fact that it was a ridiculous concept badly done, it had me highly entertained from the very beginning.  It had a quality that I loved, an abandon of sorts that allowed me to to enjoy what I was watching, knowing that it was crap but also knowing that they knew that I'd know, you know?  Yes the acting was awful, yes the story was silly, yes it was like something I might have made up when I was twelve.  But so what, it was fun, and you could tell it was made to be fun which makes a big difference.  I've seen worse, that's for sure, and it was called 2012.  Same principle (the Mayan calender predictions), but that movie had John Cusack, a lot of money, and Hollywood backing.  It should have been better than this little movie, but instead it was the worst thing ever.  Give 12 Disasters some credit for outdoing that horrible film by a mile.

Now, you can't read the good things I'm saying and expect a good movie because you'd be very disappointed.  This film was still quite bad despite the enjoyable time I had watching it.  Apanowicz as Jacey was just plain laughable, running around getting psychic messages that seemed more like menstrual cramps.  Quinn as her father was even worse, seeming way too cool about the impending apocalypse.  The film was like the love child of Dante's Peak (one of my personal disaster favorites) and Lighting: Fire from the Sky (another hilarious made-for-TV movie starring a very young Jesse Eisenberg).  Add in some wild Nazi allusions, some obvious religious reference (JC, Calvary, a scene with a pulpit) and you've got one comedically intense disaster movie.  The tagline on the DVD cover says "Not a city was standing, not even a house."  I think that about says it all. 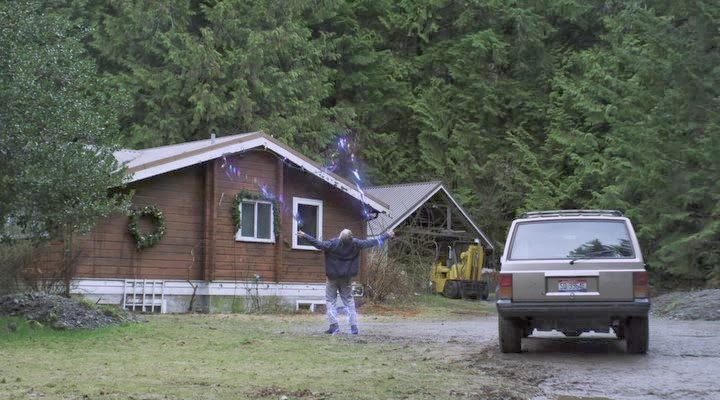 Video - With an aspect ratio of 1.78:1, the video quality was surprisingly high.  Even the effects weren't as bad as I had expected.  The picture was nice, crisp, clear, colors were good, and the effects seemed like they actually cost some money.  A nicer visual than I was prepared for.

Audio - The disc was done in Dolby Digital 5.1.  As far as options go, you have a choice between English SDH subtitles or Spanish subtitles.  The sound quality of the film was nothing spectacular and ultimately forgettable.  There were no balance problems though, to its credit.

Extras - There are zero extras on the DVD. 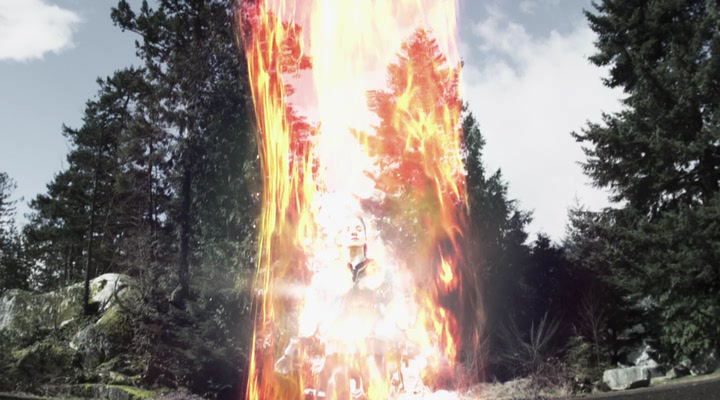 Rent It.  12 Disasters is an enjoyable Syfy movie, nothing more and nothing less.  It's not a high-caliber film, of course not, but it's worth a shot if you enjoy this genre.  It's got some awesomely bad acting, an amusing plot, and is, in the end, a fun movie.  The video quality was surprisingly good, the audio quality was fine, but there were no extras on the disc.  This is an entertainingly bad film, but one that is loveable in a lot of nice ways.