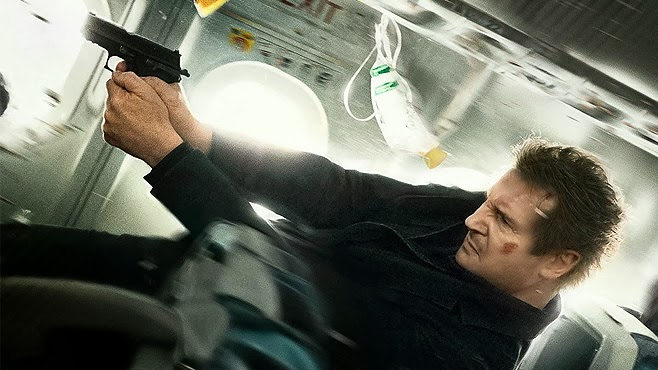 
You don't have to work very hard at figuring out what you're going to get when you walk into the theatre to see a Liam Neeson action movie.  He's gonna be cool & kinda Irish, he'll most likely beat a few men in the face with whatever is close to hand, and ultimately he'll smile that only-slightly-believable smile and we'll all move on with your day.  I'm not saying I dislike the guy; he's done a ton of great work.  But all his movies aren't Schindler's List or Love Actually.  Some are The A-Team or Taken 2.  But we know what we're getting into, especially when there's a plane and lots of guns involved.  We know it's not going to be phenomenal cinema, but we can also expect to have a fun time, a wild ride, and leave having seen some righteous heroism and a few bloody noses.  Non-Stop does not disappoint and reminds us that, even at 62 years old, Liam can still kick ass.

Bill Marks is a troubled man.  He's a drunk, a self-proclaimed bad father, and also a United States Federal Air Marshall, which is ironic because he hates flying and doesn't seem to be much of what you would call a "people person".  But he takes his job seriously, and on a flight to London he must step up and put his training to action.  At first, when Bill begins receiving a series of strange text messages, he thinks it's all a prank.  But as the threats in the texts begin to be carried out, he knows that there is a killer on the airplane, someone who will stop at nothing to get what he wants, be it money or the deaths of everyone on board.  Figuring out who he can trust might be Bill's hardest task, because anyone with a cell phone on board is a suspect.  A race against time begins and one man must unravel the mystery if he wants to save the plane. 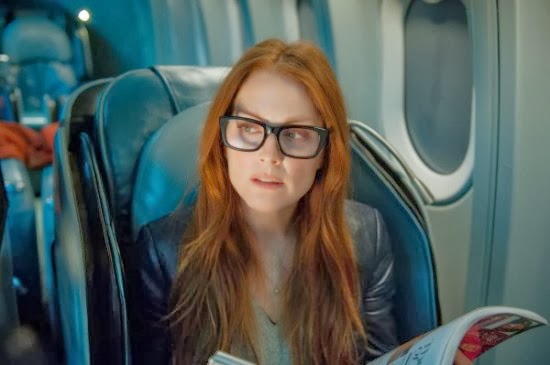 The summary pretty much explains the movie.  Of course there are some twists, but you can read that and know what you're getting into, especially based on similar films.  The entire movie, except for a tiny bit at both ends, takes place on one plane.  The action is intense & cramped, the characters butt heads as only fellow passengers can, and in the end the film is one hundred minutes of fairly exciting intrigue.  It's a thriller through & through; who's that with the suspicious bag, why did they say what they just said, get that gun before he does!  You get what you paid for with this one; a movie that is an entertaining way to spend an evening but not one that you're going to ponder much beyond standing up out of your seat.

Liam Neeson does his job though, even at an advanced age.  He's still got that underlying angst, that mysterious swagger, that cool accent.  And he can pull off a role like this without making it seem cheesy & stupid.  The same can't be said for Julianne Moore though.  She's near the bottom of my personal list and didn't do anything here to make me change my mind.  She's just not naturally talented; you can always tell she's working too hard.  And so the moments between her & Liam that were supposed to be tender were just stupid.  The plot that surrounded her didn't help much I guess; it was full of disingenuous moments and came off feeling like a DVD with multiple endings.  Will the butler or the maid end up as the killer this time and does it really matter?  The movie taken as a whole was neither great nor awful, but rather somewhere in the middle; the cool action you expect without much support behind it, an interesting mystery without a good finish.  So Non-Stop becomes just another Liam Neeson action movie, nothing more & nothing less. 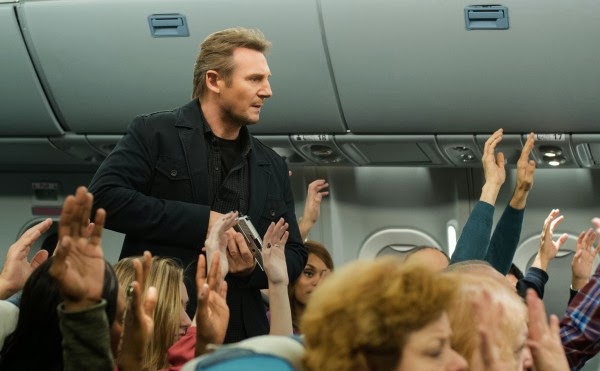