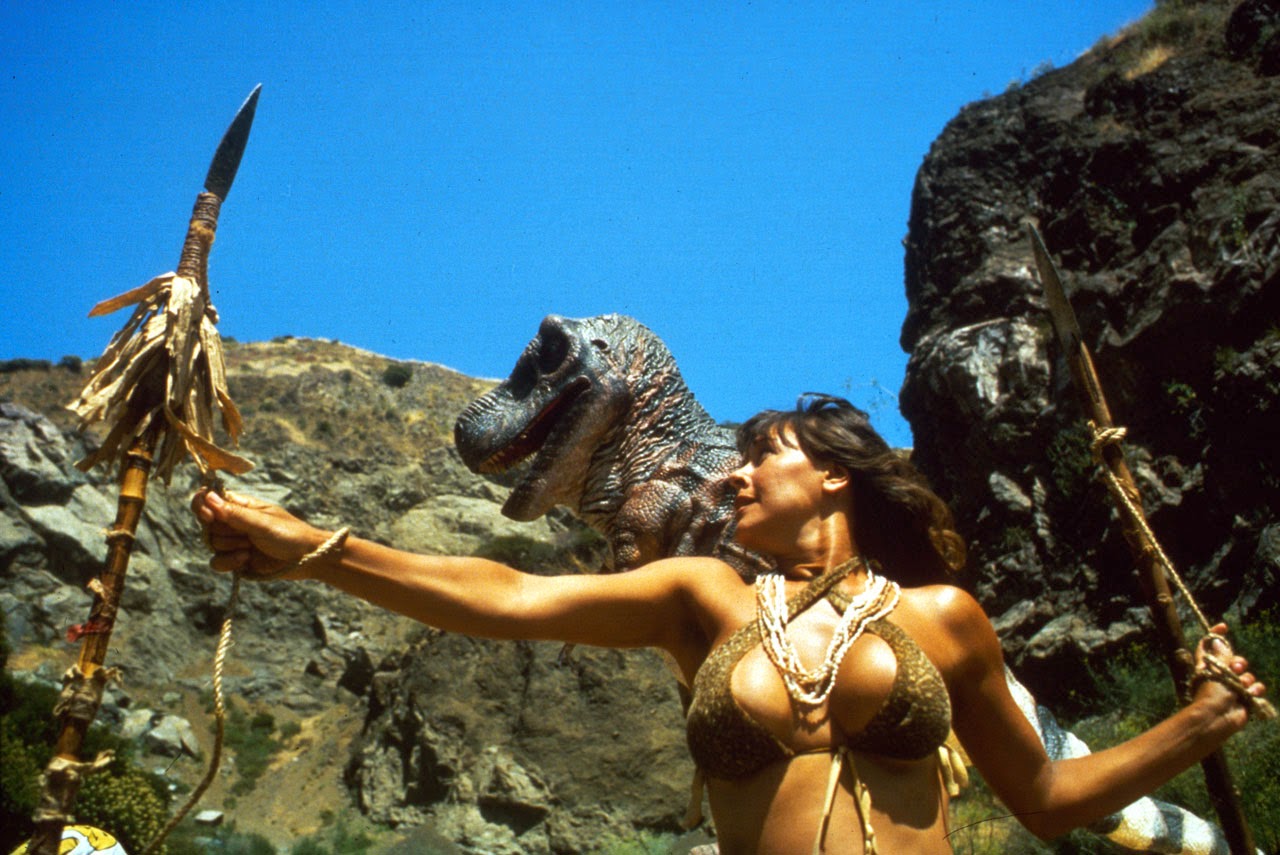 
It's wonderfully refreshing when a movie is exactly as it seems, when no effort is made to trick, conceal, or impress.  I get so frustrated when directors take themselves too seriously, attempting to present this amazingly deep product that doesn't have the talent to support anything beyond some cheap drama.  With a movie like Dinosaur Island, they know they're cheap, they know they're ridiculous, and they accept that.  Never once did I plan on getting any more than a horrible late night comedy filled with beasts, breasts, and bad acting.  And when I got exactly that, I could appreciate the effort that was put into making this film bad on purpose.

In a plane are six soldiers of the American Army.  Three of them are being flown to their court martial for desertion, three are taking them there.  But when the plane loses power and crashes, they're all in the same boat.  The island they land on isn't on any map, and when a dinosaur attacks the party they realize that they're a long way from home.  The arrival of women wearing loin cloths and carrying spears makes this land even more foreign, as does the healing volcanic water, some mystic prophecies, and the giant terror that controls the island which the natives call the Great One.  If the soldiers can protect the cave women from this monster they will become gods, living in a paradise of scantily-clad beauties.  But with their ammo running out, they'll have to use their wits to kill the dinosaurs and claim the booty.

Like I said, the movie is exactly as it sounds.  It's dumb, cheap, and nonsensical, but that's what makes it great.  At least it's not trying to be anything more than a comedic romp, a throw-away thrill that you might watch on some horrible channel at 3 a.m.  And because it delivers exactly what it promises, you won't walk away disappointed.  The soldiers are silly, the girls are at least half-naked at all times, and the dinosaurs are either blurry images or homemade hand puppets.  Everything about this movie is awful, but in a good way, in a lovable way that only an unassuming bunch of bad actors & filmmakers could pull off.  I'm not saying you should go out right now and watch Dinosaur Island; it's a horrible movie filled with stereotypes, bad effects, gratuitous nudity, and a plot that makes absolutely no sense.  But they know that, we know that, and no one would ever watch this film for any reason other than boredom, which is exactly what makes it fun.