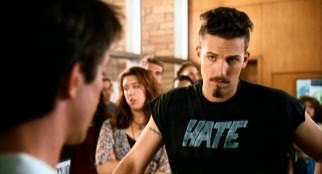 
This is maybe the strangest movie cast I've ever come across.  Not only is it a huge case of before-they-were-famous, but it's also an incredible mix of seemingly unrelated Hollywood names.  Ben Affleck just starting out.  Sam Rockwell who is a great under appreciated talent.  Alyssa Milano after Who's The Boss? but before she got all naked in Poison Ivy II.  The squinty guy from 3rd Rock, the middle-eastern friend from Indiana Jones, the girl from Joe's Apartment.  And then there are the cameos: Matt Damon as a character named Pudwacker, Matthew McConaughey as a strange truck rental salesman, Brendan Fraser & Leah Remini as a bickering couple on a bus.  It's really too many names to take in at once, too much "hey it's that guy!"  Now, the movie can't be blamed for that; most of these actors hadn't reached the big time yet.  But there's plenty more that we can blame it for, many reasons that this strange film is nothing more than an unappealing time capsule.

It's time to graduate from college and enter the real world.  But for a group of five roommates from California, what they might actually need is more time.  Jack is still recovering from his big breakup and can't think about the future.  Rob is supposedly moving in with a girl but he's having his doubts.  Dennis is a professional student who can't stop getting degrees.  And Mickey & Slosh don't know what's going on.  So the gang is about to break up and head off in their own directions, but not before they have one last fling, one last part to always remember.  But even as they get drunk, chase girls, and promise to be friends forever, they know that it can't last, that growing up is inevitable and that the wheel turns no matter how hard you try to stop it.

There's some good sentiment here, it just wasn't delivered very well.  The angst is apparent, the emotion behind leaving your buddies and taking on a world of responsibilities is pretty well represented, and even the acting at times was strong enough to elicit some real emotion.  But overall, the film was a  big dull mess.  Too many scenes, too many ideas, too many characters; it felt like an amateur's attempt at a realistic script, a personal story that didn't come across.  And it's way too dated, too 90s, not open enough for interpretation or recognition.  You just can't stop seeing the rad 90s outfits, the hairdos, the mannerisms.  And that rigidity turns the film into an odd period piece, a movie that's not good for much beyond playing Seven Degrees of Kevin Bacon.  Because it is cool for that, for seeing young celebrities, for seeing Ben Affleck's ass as a matter of fact.  But that's as far as the appeal goes.  Glory Daze is a snapshot of burgeoning adulthood in 1995, nothing more, and so if you aren't exactly 41 years old I doubt you're going to love it.