Bad Words represents my first ever pre-release promo screening.  I got to go the theatre for free, check out the movie, and I guess the hope is that I'll spread the good word.  A pretty sweet deal really, made all the better by there being zero trailers or commercials before the film and it starting exactly on time.  I might not typically choose to see a vulgar comedy, not my style I guess, but such is the life of a film critic; I guess I'll let you show me your new movie and then tell people what I thought, just another taxing day at the office.  But all joking aside, it was a cool experience and one I hope to repeat.  Now, on to Bad Words, the movie about kids that is decidedly adult.  My first take on the trailer was "pretty good but done before" and I would say that turned out to be fairly accurate; a movie that was often funny, constantly wrong, sometimes juvenile, but ultimately enjoyable.

Meet Guy, a 40-year-old man who, for some inexplicable reason, has enrolled himself into the national spelling bee.  He's breaking no rules; apparently he never passed the 8th grade and so still qualifies as a candidate.  But he's also making no friends, forcing himself into the spotlight and out of the good graces of hundreds of people; parents, participants, and staff.  Why he's doing this is unknown, even to his companion Jenny who hopes to someday get the full scoop.  So this semi-genius of a man defeats child after child, rising through the ranks with no qualms and no remorse.  But when he meets Chaitanya, an innocent boy who just wants to be friends, Guy's outlook on the competition changes and the point of his victory, although deep-seeded, begins to seem frail. 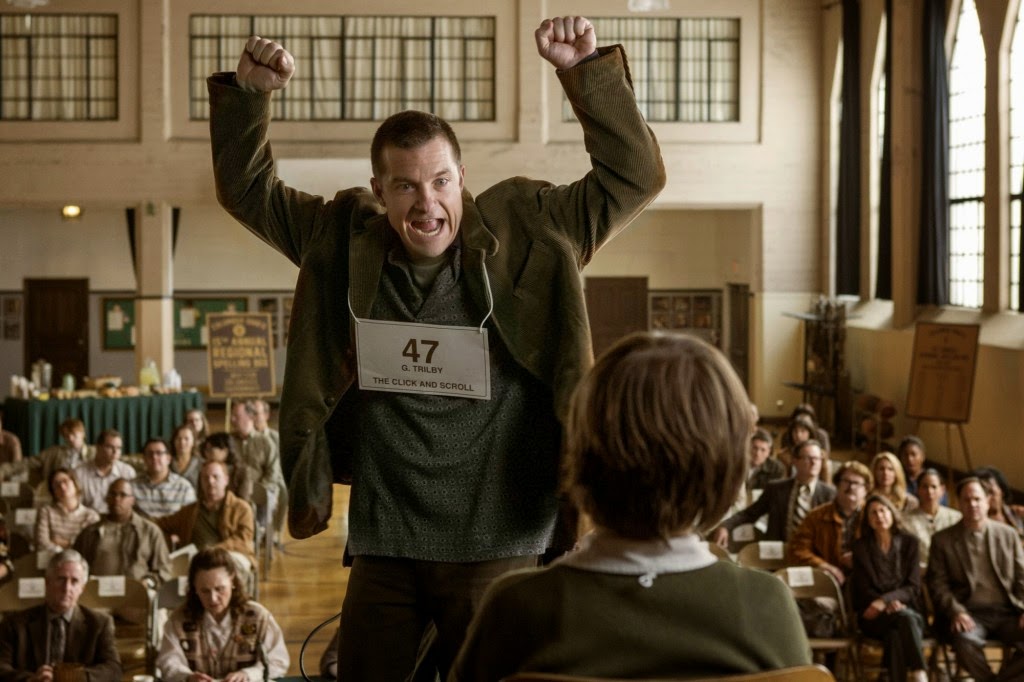 There is a very certain sense of humor you must have in order to love this movie, and apparently I at least have a bit of that because Bad Words was pretty damned hilarious.  Yes it was often childish, very crass, sometimes not too bright.  But man was it funny in an extremely wrong way.  Telling children horrendous lies, giving a kid liquor, putting a lobster in a toilet, making fun of heavy people; horrible, horrible, nasty things, but somehow still funny in a why-am-I-laughing-at-this kind of way.  And every once in a while the comedy was of the genius variety; brief moments or quick lines that had me laughing out loud.  But for the most part it was raunchy & wrong, a shock to your better senses and perhaps an attempt to get you to loosen up a little, stop being such a prude.

Jason Bateman was pretty perfect for this role.  His demeanor usually says that he doesn't give a shit, an ideal attitude to bring to the character of Guy.  Of course, he directed the film too and was able to guide the story down the path he wanted it to go.  For his directorial debut I'd say it went pretty well.  Only a few times did it feel a little out of control; I could do without seeing a folding chair used as a weapon ever again.  But for the most part his acting and his direction were quite strong.  Kathryn Hahn was fairly funny; I enjoyed her a little more in We're The Millers, a movie that actually has a similar comedy & feel.  And the kid did a good job, coming off as naive and corruptible, giving the movie a touch of heart.  Bad Words in an entertaining movie, one that might bludgeon you with dirty jokes & awkward moments but in the end is solid enough that it doesn't feel cheap.