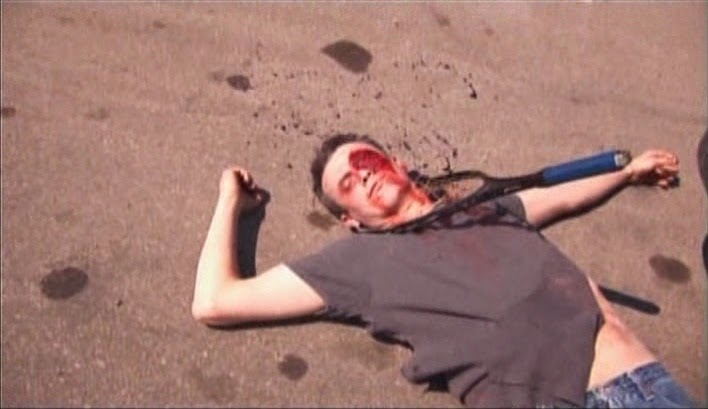 
Zombies are popular subject matter for indie filmmakers.  Why not, I guess.  The horror genre as a whole is a medium that allows high entertainment for small amounts of money.  Some fake blood, some screaming hotties, a shaky camera, boom.  And zombies fit right into this formula; easy to produce, easy to enjoy.  So I've seen a ton of low budget undead in my time as a film critic, some awful some pretty cool.  But I've never seen a zombie/horror/post-apocalyptic movie quite like this one.  Reel Zombies is in a category all its own; a mockumentary/comedy that uses the standard indie horror idea and adds a twist that smacks of genius.  I definitely didn't expect that from a film like this, but hey, miracles happen every day. 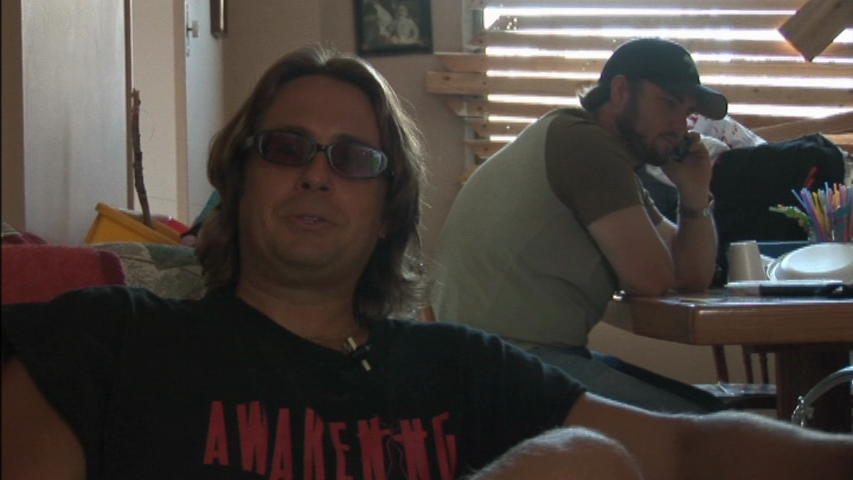 First, a little background.  It's the near future and apparently there's been a zombie apocalypse.  The world's kinda been overrun, things are kinda bad, but it seems like the undead are only kinda scary.  They're really easy to avoid and life is pretty much continuing as usual with a little added military element.  Life is definitely normal for a group of Canadian filmmakers, and by normal I mean boring.  And then one of the gang, Mike Masters, has a brilliant idea.  Their first two films, Zombie Night 1 & Zombie Night 2, were horrible flops, but that was before real zombies showed up on the scene.  Calling the old group together again, he starts in motion a new type of zombie movie; one that uses real zombies.  With a few undead handlers, why couldn't reality be inserted into fiction to create something that's never been done before?

So the team reunites.  Mike the brains behind the chaos, David the megalomaniac director, Dan Rooney the star of the film, Stephannie Hawkins the leading eye candy.  And constantly filming is Fruman the documentarian, catching all the behind-the-scenes action as the movie begins to take shape.  From choosing the crew to brainstorm sessions, from makeup strategy to fight-scene blocking, every moment is caught on film.  And so the actual movie bumbles along, hitting snag after snag including uncooperative zombies, accidental bitings, and dramatic actors.  But the film seems like such a good idea, with the world presumably returning to normal, that no one wants to quit, even with disaster looming.  So they trudge on; through the rain, through the zombie attacks, and through their own incompetance. 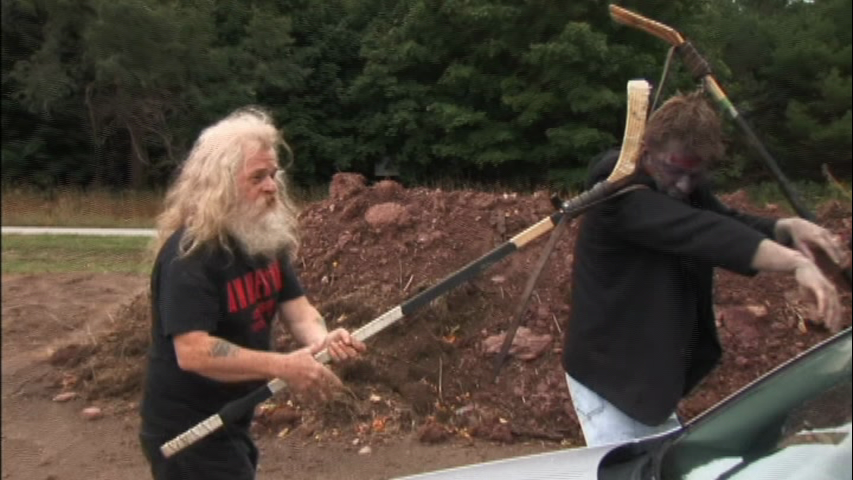 I would say that Christopher Guest is one of my Top 5 favorite directors.  His mockumentary style is a thing of beauty, adding a new element to comedy that no one has yet to do better.  Waiting for Guffman, Best in Show, A Mighty Wind; amazingly hilarious films that allow you inside the action through an incredibly original concept.  And now the same idea has been applied to a zombie movie and the results are excellent.  It just adds a great quality to the film that allows for the amateur feel, the handheld camera, the bad acting.  Call it a trick if you'd like, but the mockumentary concept hides a lot of faults.  I haven't seen this team's first two zombie flicks, but I can imagine how they go & this third try has got to be the best of the trilogy.

And aside from covering over low budget limitations, the style works perfectly as a comedy.  We get to hear what the minds behind the magic are thinking as they attempt to create this horrible film, and the results are hilarious.  Ponderous asides, revealing monologues, candid captured moments; we get to see it all and to feel the humor of the situation.  The zombies themselves are super funny, laboring around bothering people in way that's not too dangerous unless you get close.  And to stop that from happening you have patented belts attached to hockey sticks, because of course.  They may bite people every once in while, infecting them and basically killing them instantly, but what job doesn't have its hazards.

But at some point I have to put aside the gimmick and judge this as a film, and of course when I do that it doesn't hold up that well.  The "acting" was alright I guess; everyone just kinda played themselves anyway, so they weren't called upon to do too much.  The blood & gore were pretty fake, but then again it was supposed to be fake, except when it wasn't.  See, you can't get around the pretend documentary, the film within a film.  It always comes back to that and I guess that's the saving grace of the project.  You've got a zombie movie about a zombie movie with everything you usually see in zombie movies thrown in on purpose because they're trying to make zombie movie.  Looking back, how could I be expected to resist this film; a genre I love making fun of itself but ultimately delivering exactly what I wanted. 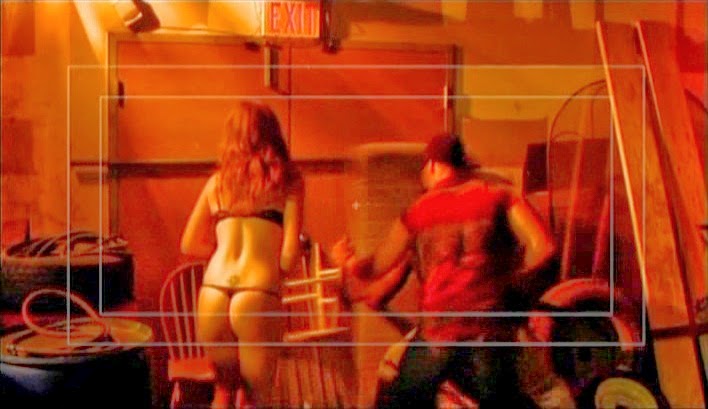 Video - With an aspect ratio of 1.78:1, the video of the film is just good enough not to be horrible.  Of course it's not a great visual; it's supposed to be a documentary seen through a low-cost camera, and for that it works.  The picture quality is passable with no major problems other than the intentional.

Audio - The DVD is produced in Dolby Digital English 2.0 Stereo.  There are no language options, but you can turn on audio commentary with directors Mike Masters & David J. Francis and producer Stephen Papadimitriou.  The audio quality of film is fine, about what you'd expect filming outside on a windy day with your camcorder.

Extras - There are a few extras on the disc.  A reel of deleted scenes and outtakes totals 42 minutes.  It's a nice montage of short clips not used in the film, adding a little extra "behind-the-scenes" action.  Also there is an original trailer for the film. 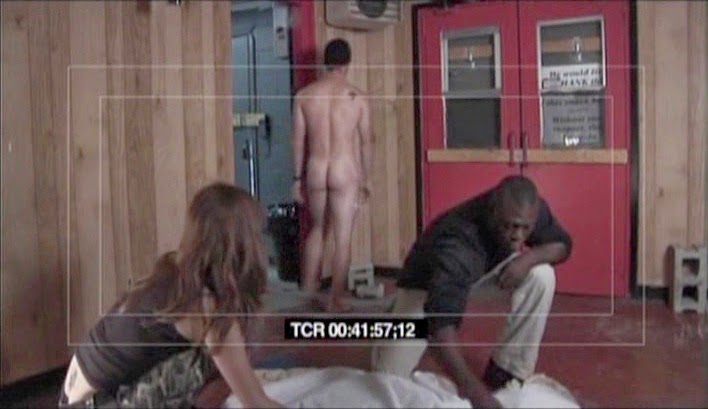 Recommended.  Reel Zombies is a homage to horror movies, a mockery of zombies films, and an original comedy that pulls it all together.  It's an irreverent representation of indie filmmaking, showing both the creative & gritty sides of what must seem like an impossible task when just starting out.  The video quality is low but understandable, the audio bad but perfect, and the disc even has a few extras.  If you like the genre check this out; it's a refreshing take on an old storyline that's surprisingly entertaining and smart.