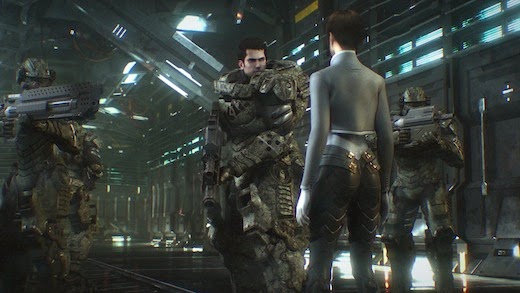 
I guess you could call me a Starship Troopers buff.  I've seen the original film multiple times, own the DVD, and call upon it whenever I need some good bug-killing action.  And I've also seen the rest of the trilogy, if it can be called that.  Check out my reviews of all three films here: Starship Troopers, Starship Troopers 2: Hero of the Federation, Starship Troopers 3: Marauder.  The movies get progressively worse after the first one, but they all include some of the same elements, action sequences, and story lines.  I actually really like the original, even beyond the explosions and bug guts.  But I wasn't expecting much out of the fourth in the series after seeing numbers two & three.  And I definitely wasn't expecting animation, which threw me for a loop right away, as I apparently hadn't noticed that detail after reading the description.  But regardless, I assumed this movie would be pretty horrible, only enjoyable because of the Casper Van Dien classic.  Well sometimes it's nice when you're wrong.

So here we are, the fourth installment of the Starship Troopers saga and the war against the Bug is still ongoing.  But there's a new breed of mobile infantry, a modern soldier who is better equipped, well trained, and specializes in extermination.  On a distant asteroid, a human base has been overrun by the Bug, endangering the top secret mission in process there headed by Carl Jenkins.  Alpha Team is sent in to rescue any survivors, including Jenkins, but when they arrive Carl flies the coop, commandeering a starship piloted by Carmen Ibanez.  Alpha Team rendezvous with the survivors of the base, picks up Ibanez, and is about to head home when they get an urgent message.  Johnny Rico commands them to find Jenkins, take back Ibanez' ship, and find out what the hell is going on.  The troopers are ready for action, but none of them know the depth of the plot, the secrets behind Jenkins' mission, or the danger they're about to enter.

As much as I like the original, this one is right up there.  It just has so many things going for it, it's hard to sum up.  It's a great homage to the first movie, even bringing back the core characters.  It's full of fast-paced action and cool fight scenes.  It has a complicated story that at the beginning seems a little confusing but by the end is as strong as any other great sci-fi film.  And I don't really watch animation outside of Disney movies, but this one really got it right.  They might have used the animation to cover up a lot of flaws, but more power to them.  With real people I'm sure the acting would have been awful, the effects stupid, and the budget low.  But with computers they were able to make everything look the way it did in their heads, producing a movie that was way more entertaining than either the 2nd or 3rd film in the series.  This one was a cross between Star Trek and Halo, a sci-fi adventure that never lost control of its story while always maintaining an awesome video game feel.  I'm definitely surprised by how much I liked this movie, but would quickly recommend it to sci-fi fans, video game nerds, and Starship Troopers buffs everywhere.