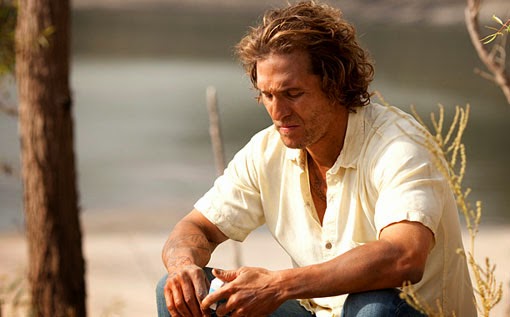 
Dallas Buyers Club took America by storm right before Oscar time last year, creating a ton of buzz, catching the attention of millions, and ultimately winning multiple awards.  It was nominated for Best Picture, Jared Leto won for Best Supporting Actor, and Matthew McConaughey won for Best Actor.  It was seen as the high point of McConaughey's career, starring in such a moving drama that must have taken every bit of his soul to pull off.  The movie was great, he did a spectacular job, but I'm here to say that Mud is the better film.  Not only was it surprisingly spectacular, but McConaughey fit his role much better in this film than in DBC, producing what I would call the best character of his career, hands down.

The movie may be titled after the man pictured above, the catalyst for the film, but the lead character is a boy named Ellis.  He's a river boy, working with his father for enough cash to scrape by, living in a houseboat on the water that is his home.  Ellis & his best friend Neckbone cruise the river on a daily basis, and one day head out to an island where an old boat has been washed up into a tree.  The two mean to claim the wreck as their own, but someone is already living there.  His name is Mud, he's a local returning home, and he's in a mess of trouble.  Some dangerous men are after him, hence his hiding out on an island, but all he wants is to rescue the love of his life, Juniper, fix up the forgotten boat, and escape into the Gulf.  With the boys' help, he just might make it, but they soon learn that Mud has some dark secrets, that this fairy tale isn't as simple as it seems, and that love can't always conquer all.

There's a lot to touch on with this film, a lot of little things that make it so great.  The biggest is McConaughey and the best performance I've ever seen him deliver, including Dallas Buyers Club.  The latter might have taken more effort, but this character was perfect for him and so always felt real & easy.  The boy, Ellis, was almost as good, playing the naive, romantic, street-tough country kid perfectly.  And the side characters were excellent as well: his friend Neckbone, his parents, Michael Shannon in a small role.  Only Reese Witherspoon failed to be great, but luckily her part was little.  Speaking of Michael Shannon, he worked in a film also directed by Jeff Nichols called Take Shelter, a dark & disturbing drama that deserves your time.  Anyway, Mud is a strong film with good acting, but also interesting music, a cool feel, some heart-pounding moments, true feeling, just a touch of Hollywood drama, and depth when it matters most.