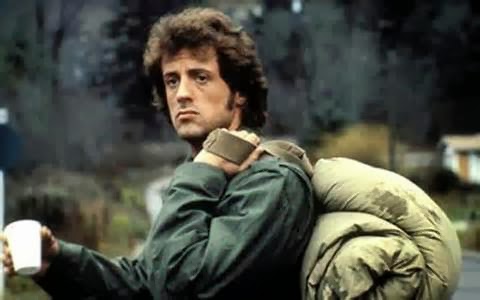 I wasn't born when this movie came out and I was only two when the sequel was produced, but I remember Rambo as a piece of my childhood.  Rambo toys were everywhere, from action figures with his classic bandanna to weapons like his giant knife.  I wasn't an extremely rowdy kid, but I still enjoyed playing with my Rambo motorcycle and killing all the bad guys.  Only later did I watch the original film for the first time and after that it became a mainstay in my life.  First Blood always seemed to be on TBS or USA late on Friday nights when there was nothing else to see or do and I always found myself watching it.  To check it out on Blu-ray as an adult was a lot of fun, and nothing has been lost in the thirty-two years since Rambo first appeared.

John Rambo, Vietnam vet, Navy SEAL.  He's returned to the States to find work, to connect with his old buddies, but his reception hasn't been a warm one.  As a vet he's a pariah, an unskilled worker, a shifty drifter who no one wants around.  And when he tries to pass through a sleepy Northwest town he finds trouble that he never intended to seek.  The local sheriff there instantly takes a disliking to Rambo, writing him off as a bum.  He arrests him, tosses him in jail, and pats himself on the back for cleaning up the streets.  But this small-potatoes cop has gotten way in over his head.  Rambo is unstable, traumatized by the war, afraid of being a prisoner, and so he escapes into the local woods, fighting off a posse of fuzz along the way.  So now it's on; arrogant sheriff against a killing machine, the National Guard against a weapon specifically designed to survive at all costs.

I mean, come on, can you get any cooler than that?  Sly Stallone as a war hero who can kill anyone he wants with his bare hands?  Awesome.  As I kid I loved it, as a teenager it was fun to watch, and as an adult it still packs a punch.  You might think the story is a little wild; man with a bowie knife jumping on soldiers in the woods.  But it doesn't start that way, and that's the magic.  The movie starts slow, believable, realistic.  It only escalates bit by bit, the action depending upon the situation, leading to a climax of bombs and guns.  The genius of the movie is in the progression of events, the snowballing of intensity, until you've completely bought in.  Now, it's not all perfect.  Stallone is pretty awful when he opens his mouth, which really doesn't happen until the end, so that's OK.  Crenna is equally bad, but thankfully Dennehy is surprisingly brilliant as the sheriff.  So taken as a whole, a little bit of bad acting doesn't detract from a kick-ass story, one that I will forever enjoy.