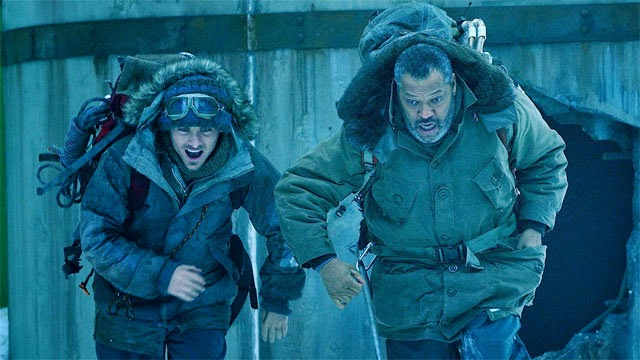 
The cinematography has to be pretty bad for me to make a point of mentioning it.  I guess I'm just not a details guy when it comes to movies, at least when it comes to your average movie.  Give me a good story & some good acting and I'll forgive a lot of flaws; don't sweat the small stuff, huh?  That's not to say I don't enjoy a film or a director who dictates every visual & line; Wes Anderson is notoriously specific in his work, down to the (usually pink) furniture.  Anyway, the point is, when I'm watching an action movie about the Ice Age I'm not too concerned about perfect execution.  But something went terribly wrong in The Colony; I noticed everything and nearly everything was bad.

In the not-too-distant future, the Earth will be covered in ice.  Global Warming had caused some climate concern, so mankind took it into their own hands to control the weather.  How do you think that worked out?  The result was a global snow storm that lasted decades, covering the surface in ice and killing off the plants and animals.  The few humans who survived were those who made it underground, who organized, and who became fairly brutal in their struggle just to live.  A system of colonies has sprung up over the years, independent stations who communicate and help each other.  So when one colony sends out a distress signal, a party of three men venture across the frozen tundra to check up on them.  What they find there is something less than human, a threat to their very existence that cannot be allowed to follow them back to the colony.  But things back at home aren't going so well either, and there won't be any easy choices in this fight for life.

The story is actually pretty cool, no pun intended.  I'm a sucker for anything post-apocalyptic, especially small groups of survivors trying to scrape away after some sort of global catastrophe.  So I have no problem with the colonies, the underground bunkers, the seed caches, the sickness quarantines, the constant parkas.  The problem, aside from the poor visuals & crappy cinematography, was that every piece of the movie made me want to call bullshit.  I mean, come on.  It's snowed for thirty years straight but the drifts are only a few feet deep.  It snows all night but in the morning people follow your footprints.  Twenty people with guns can't stop eight people with knives from breaking through a door.  Nothing about this movie was believable or even remotely plausible.  The action seemed specifically crafted to be ludicrous, to not be how anyone would ever act, react, move, or be.  I tried to give The Colony some benefit of the doubt, some leeway as a sci-fi flick, but it was just too ridiculous, too poorly made, and, in the end, too much to forgive.