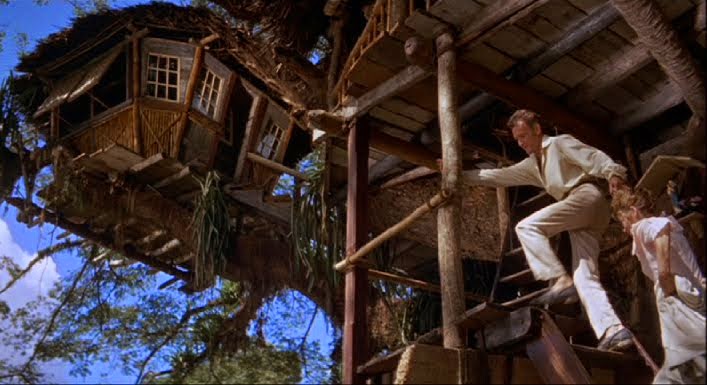 
Swiss Family Robinson was a childhood favorite of mine, a movie I watched a hundred times without boring of it.  It's an adventure on a grand scale, a fantasy that I kept with me when I played as a kid.  How incredible to live on an island paradise in a tree house, to explore the jungle, to befriend the local animals.  Watching the movie now still brings back those same feelings, those dreams of excitement & danger.  I guess that's a sign of a classic, a film that can transport you back in time with a single song or line, a movie that you never forget, a story that never loses its magic.

On a ship bound for the territory of New Guinea, a family from Bern travels toward what they hope will be a brand new life.  But pirates and a sudden storm force the ship off course, into a reef, and to its doom.  The crew abandon ship, leaving the Swiss family on board to fend for themselves.  Morning reveals an island close by, a tropical landscape full of life, and the family make their way there.  Moving the ship's wreckage to the island, finding food, building a shelter; these things take time & energy, but the family persevere.  Eventually they make a beautiful home & a life for themselves, but the threat of pirates is always on the horizon and the boys will eventually grow out of their small existence, forcing further exploration and preparation for a battle that will most certainly come.

It might be fifty odd years since this movie was released and twenty some since I saw it last, but it still holds the same wonder.  The story is based off a very boring book, a reading I wouldn't recommend, but the film version fleshes out the characters, creates drama, and delivers two hours of highly entertaining fun that the whole family can enjoy.  The tree house is famous now for its ingenuity and grandeur, as is the music that drives the film from start to thrilling conclusion.  The animals, the pirates, the escapes, the adventure; all combine to create a plot that's both classic & brand new with every revisiting.  Thankfully, this is a childhood favorite that loses nothing with time, a epic family drama that I could watch a hundred times again without ever tiring of.