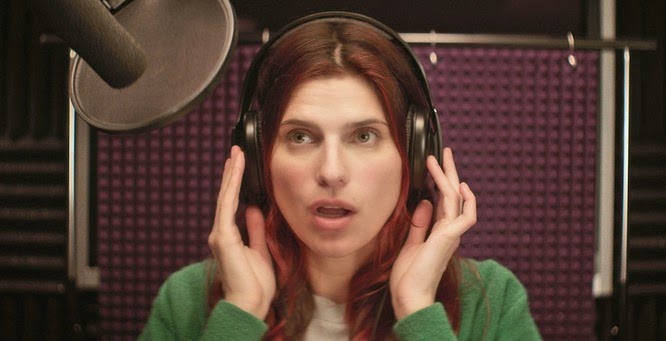 
Who the hell is Lake Bell?  Click her name above and take a look at what she's done with her career so far.  She's a 35-year-old actress who has been in literally the worst movies & TV shows and who has only dabbled in directing & writing, pounding out a few shorts.  Until I saw her in Million Dollar Arm, I had never even heard of her before, and that's not a knock on myself.  Where in the world did she come from and where did she get the balls to write, direct, and star in a film that features a ton of comedic talent and challenges the very fiber of Hollywood?  In a World is a movie that you'll never see coming, that will crack you up in a way you never imagined, and will have you questioning the sexist regime that has been controlling cinema for the last 100 years.  Lake Bell is here and demanding that you remember her name.

Truth; the most famous voice actor in history died in 2008.  His name was Don LaFontaine and you've probably heard him a thousand times.  He was a god in the industry, supplying his deep voice to countless movie trailers, often beginning them with "In a world..."  Fiction; his death left a void in the voice-over community, a void that can only be filled by one of three talented people.  First is Gustav, the next big thing, the wonder boy of the industry, the hot prospect whose pipes blow everyone else away.  Second is Sam, the vet, the man who was always second best until Don died, the grandfather of the job.  And last is Carol, Sam's daughter, a voice coach who has always been great with impressions but who wants more than anything to break into the movie trailer world.  When a new film is announced, one that will reprise the "In a world..." bit, these three combatants will fight for the right to become America's next voice, the torchbearer for the next generation.

I'm still a little stunned.  The audacity of Lake Bell to think that she could crack the boys' club of Hollywood, direct a movie that she also wrote & starred in, craft a comedy that would be something other than a cheap chick flick that you go see with your bestie.  How dare she!  And guess what; nailed it.  Not only was the film wonderfully original but it was also funny throughout, never banal or stupid, the things that almost every other comedy ever made are.  Her acting, her editing, her script; it was all near genius, a comedic masterpiece that no one saw coming.  She obviously didn't listen to or care about any criticism, she just made the film that she wanted and hoped for the best.  Well, it worked.  And the cast was brilliant, a whole crew of uniquely funny actors with small egos: Rob Corddry, Nick Offerman, Stephanie Allynne, Demetri Martin.  There were some clever cameos as well: Eva Longoria, Geena Davis, Cameron Diaz.  Everything fell into place to make In a World a gem of a film, a no-holds-barred attack on the status quo, an original comedy that will have you on the lookout for Lake Bell's next project.