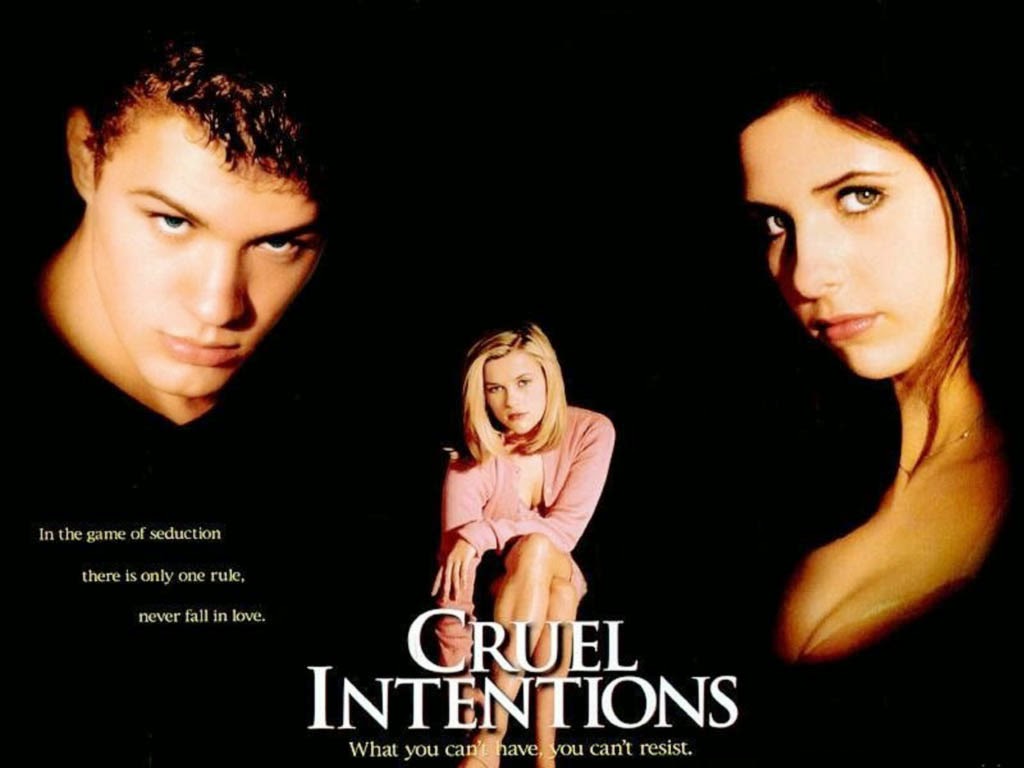 
Growing up in the 90s, I can appreciate this time capsule film for what it's worth.  What may seem dated & dramatic to others is exactly what I want to see when I watch a movie from an era that was super-dramatic, over-angsty, and ultra-dated almost simultaneous to events.  The 90s were years of emotion, of defining, made even more over-the-top by comparison to the boring 2000s when nothing happened but technological & social advancement.  So watching Cruel Intentions is basically a visit to a decade, a time that many of us grew up in, will always remember, and can't help but love, even if it wasn't always pretty.

Sebastian & Kathryn are step-siblings, disgustingly wealthy New York youngsters whose parents are never around and who have way too much time & money on their hands.  What they enjoy as a hobby is manipulating others, advancing their reputations, corrupting the innocent, and making interesting wagers on the outcomes of their conquests.  Their latest challenge is this; Sebastian wants to seduce Miss goody goody virgin Annette before school begins, cementing his status as the city's most talented play boy.  If he succeeds, Kathryn will give herself to her brother, something they've both wanted for some time.  But if he fails, he must give his beloved car to his sister, something he would hate to part with.  So the evil plan goes forward, complicating by Sebastian's burgeoning feelings, Kathryn's jealousy toward a naive simpleton named Cecile, and the possibility that cruel intentions might lead to an unexpected happiness.

Oh the angst.  That's what the 90s were all about after all, passion & discovery, experimentation & drama.  And that's definitely represented well here.  From the clothes to the music, this film screamed 90s and never apologized.  Yes it's dated, but that date happens to be a time that I enjoy revisiting, even if it's just for a bit of cheap nostalgia.  The story is fun, crafty, sexy, wrong, entertaining, and the characters are made perfectly to support the plot.  It's a surprisingly tame film for the content, becoming more of a tease than a skin show.  I guess it was aimed at a young-ish audience, though it does push the boundaries.  The cast is pure late 90s; Phillippe, Gellar, Witherspoon.  And there's more where that comes from: Selma Blair, Joshua Jackson, Tara Reid, Sean Patrick Thomas.  It's a who's who of teenage melodrama, and that's exactly what this movie is.  Enjoy it on that level and don't look for much else; you'll have a nice flashback and a pleasant evening.