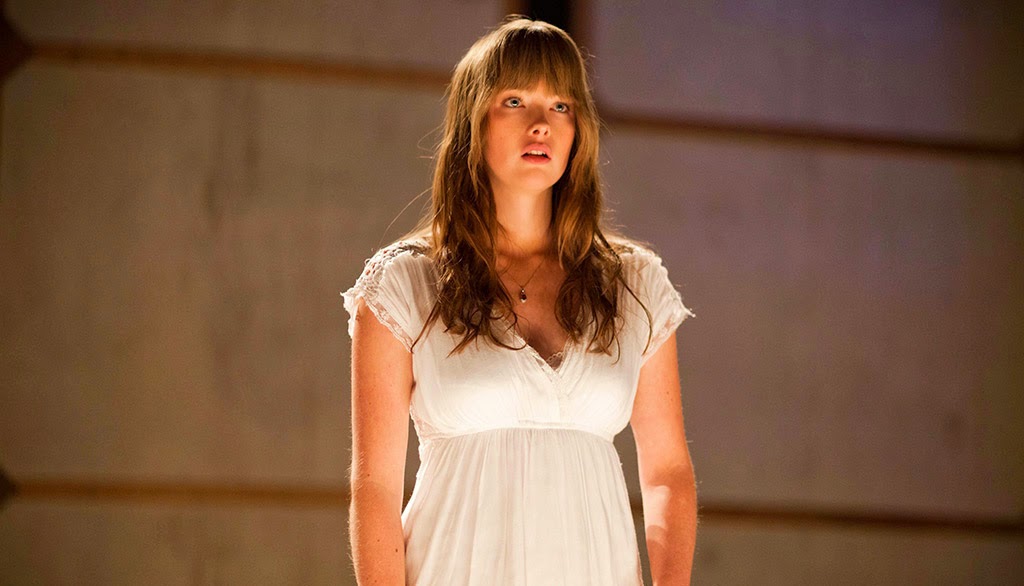 
Think Glee meets Halloween.  Not a very natural mix of media, but Stage Fright is nothing if not unnatural.  It's a musical horror spoof that sings about being gay and then stabs people in the mouth.  Literally.  Not your average slasher film and not your everyday teen comedy, but something in between that's not very easy to love.  And I love horror, I'm into musical theatre, a combination of the two should be everything I ever dreamed of.  But perhaps this was a failed experiment, for while it doesn't completely bomb, it definitely doesn't deliver the package that I we can assume the filmmakers were trying to produce. Yes there are songs, yes there are murders.  But quality cinema, that's lacking.

To set the stage, we begin in the past.  The beautiful Kylie Swanson has just starred in the new hit musical The Haunting of the Opera.  Kylie celebrates with her producer Roger while her children Camilla & Buddy join her backstage.  Camilla dreams of someday following in her mother's footsteps, but that all changes when Kylie is viciously murdered by a masked killer.  Fast forward to Center Stage, a camp that Roger owns and the siblings work at.  They are now young adults and have been raised by Roger, who still produces shows at this workshop for budding thespians in hopes that someday he'll make another hit.  This year's camp show with be a revival of Haunting, a play that both terrifies & intrigues Camilla.  She longs to make her dead mother proud by starring in her classic role, something that she might be born to do.  But someone in the camp doesn't agree and will kill out of hand in order to ruin the production.  Who is the crazed murderer and what will the body count be when the curtain finally falls?

Obviously the movie is a play on Phantom; a masked "ghost" who has a vested interest in the beautiful young lead female.  It definitely has a modern Phantom feel and even the music mirrors that of the Broadway smash.  But then it's also an all-out gore fest slasher film with a killer who likes to sing rock instead of Sondheim.  Those two things just don't go together.  I love both genres and I still didn't enjoy the odd combination.  I doubt fans of either style would volunteer to meet in the middle for a bit of what they like but a heaping helping of something that grosses them out.  So who knows, perhaps there are twelve people in the world who would absolutely die for this movie, twelve who might kinda like it, and the rest who it would completely turn off.  Don't watch this film only because you love Meat Loaf, or Minnie Driver for that matter; this isn't something I'd recommend to anyone really, even though I couldn't quite hate it myself.