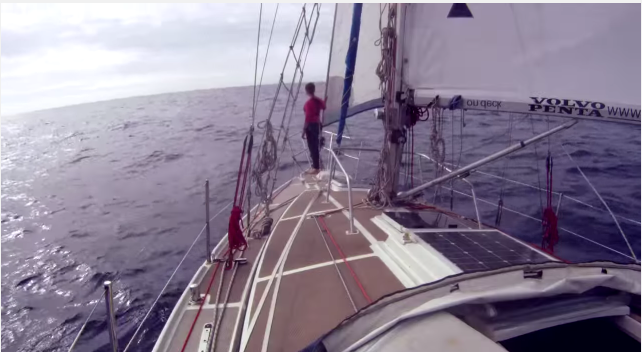 
It's rare that a documentary draws me in the way that the genre is supposed to.  Documentaries ought to be compelling, interesting, captivating, whistle-blowing, something that catches your attention with a new look at an event or a person that you should know more about.  And a few have captured me in that way; Food Inc, Life in a Day.  But I guess the genre isn't for me because most of the time I just find the material boring.  Maybe that shows a bad attitude, an air of knowing enough already, of not wanting to learn about the world around me.  I'd like to think that that's not true, that perhaps I just need a bit more entertainment from a film than your typical documentary is able to deliver.  Regardless, Maidentrip was not the movie that would convince me to give more like it a chance, not the riveting story that it was advertised to be.

Here is a film that is about as unedited and unproduced as you could possibly make, a true story in its truest form.  Almost all the action was filmed by Laura Dekker herself, the star of this unique documentary.  Laura has a dream to sail around the world, to take her ship Guppy across the entirety of the globe.  The trip will take two years, but by completing the journey she will become the youngest person to circumnavigate the globe alone in a sailboat.  Her goal isn't speed, it's to see the world, to stop off at islands & sites along the way, to meet the people of the Earth on an adventure that she will never forget.  And so Laura sets out from Holland, headed west around the world, filming herself through weeks of travel at sea without sight of land or other humans, pushing herself to her limits, and experiencing what almost no one has before.

I just wish something would have actually happened.  It's a cool story, very interesting that a 14-year-old would commit to two years at sea, fascinating to look at our planet from its oceans.  But nothing exciting happens.  Maybe there's a storm, a hard pass through reefs once, some food spills from the stove, but absolutely nothing entertaining occurs.  It's a boring journey, one that must have meant something to Laura Dekker but means absolutely nothing to me.  Sure she sees some nice sunsets and islands, and yeah the freedom that she lives with is a bit enviable.  But in the end I just wanted her journey to be over, probably more than she did.  She seemed content taking video selfies on her ship, making entries in her video journal talking about how peaceful she felt.  But I couldn't help thinking that, were she ugly, no one would want to watch this movie.  Laura is a beautiful girl, someone who captures your attention with her vivacious personality; beyond that I didn't see or feel anything special.  Maybe I just don't like documentaries, or maybe I just don't like being unimpressed.