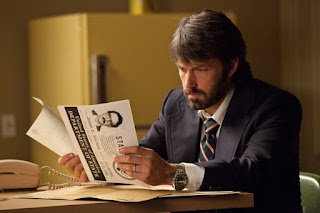 You can never have too much Ben Affleck.  Directing, acting, or just smiling that smile ...*sigh*.  Alright, obviously Affleck is a Hollywood heartthrob, but honestly he's more than that; he's talented.  From acting in great movies like Good Will Hunting and Chasing Amy,  to his first attempt at directing, Mystic River, a phenomenal film.  He may not strike every note, but more often than not he brings 'it' to his work and produces a hit.  Argo is no exception.

Based on actual events, the story centers around a group of American embassy staff in Iran who escape a hostage situation, only to become trapped in the country, taking shelter in the Canadian ambassador's home.  Affleck, playing a CIA operative, must concoct a plan that will fool the Iranian police and security staff, while safely bringing the group out of an increasingly dangerous situation.  His plan; to create a fake sci-fi movie with the help of Hollywood and go to Iran himself in order to rescue the captives and bring America back from the brink of war.

The details of this real life mission were kept confidential from the early 80s until the Clinton era, as Canada was given full credit for the rescue to stave off backlash towards the other American hostages.  The historical accuracy of the movie was excellent, and the intensity and fear of the situation was perfectly presented.  The best actor in the movie was definitely not Affleck, it was Alan Arkin, but Ben did a ok job; I would give him more credit for good directing.  Overall, an interesting movie that relied more heavily on the drama of real life than on great film making.