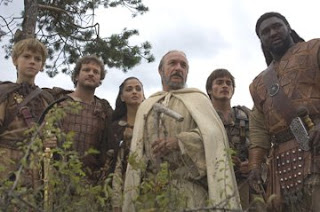 'Silly' is not a word that you want people to use when describing your movie.  You don't want your film to come off as a bad episode of Hercules or Xena: Warrior Princess.  But then again, when your only previous work was in television, and it was, more specifically, directing Hercules and Xena: Warrior Princess, well then I guess we should have seen it coming.
The Last Legion is a story of the fall of Rome.  It's empire has crumbled and it can no longer control the hostile people that make up its realm.  As Rome is taken, the last Emperor, young Romulus Augustus, must rely on a small group of strange companions to keep him safe.  The band pursues an ancient legend of a sword that will protect justice and freedom, and ultimately save the vanishing Empire.  From the plains of Italy to the mountains of Britannia, good battles evil in this epic struggle.
It was hard to keep a straight face while writing that.  I know it sounds interesting, and the history behind the film definitely is, but the movie?  Not so much.  Corny acting, bad plot lines, and silly segues doomed it from the beginning.  Colin Firth has done better, but I doubt he has done worse; he was entirely unbelievable as a famous Roman general.  Ben Kingsley as the mysterious magician was laughable.  And the brave knight who turns out to be a woman and to whom the hero falls for?  Gag.  It was literally too bad for television, let alone the big screen.  The only saving grace of the film was the ending, which tied together the loose ends nicely.  But, then again, by that time any end would have been welcome.
My rating: ✰
Posted by Olie Coen at 11:39 AM