Movie Review - Everything Must Go 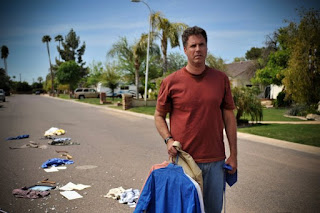 I like Will Ferrell.  Some people think he and/or his movies are stupid, I think he's funny.  I defend him and point to his successes: Zoolander, Old School, Elf, Wedding Crashers.  But then again, he's had some failures as well: A Night at the Roxbury, Superstar, Bewitched, Semi-Pro.  I was curious and excited to see how he would do in a more serious role, how he would bring his own brand of humor to a deep character.  I really thought he could make it work.  I was wrong.

Everything Must Go is a sob story from the beginning.  Ferrell loses his job and, returning home, finds that his wife has kicked him out, putting everything be owns in the front lawn.  To make matters worse, he is a recovering alcoholic who can't stay sober and all of his relationships are breaking apart.  As he befriends a neighborhood boy and an attractive woman who just moved in across the street, he attempts to sort through his "baggage" and comes to terms with his new life.

Right after watching this movie, I thought "It was alright."  But now that I've had some time to think about it, I was wrong again; it sucked.  Will Ferrell was fine.  I was sympathetic to his character, he was mildly funny, and he was interesting.  Not only can I not say the same for ANY other actor in the movie, but they were all decidedly sub-par; at times I wondered if they were even acting.  The movie wasn't deep enough to really make you think, it was just sad with not enough humor to juxtapose the drama.  Blame Rush, as he is both a first time writer and director.  He failed, his script failed, his actors failed, and although it wasn't terrible I feel like I wasted my time.