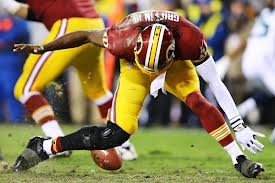 Everyone is weighing in on the topic of Robert Griffin III, his knees, his coach, and his career.  So, of course I have to put in my two cents, for the reading pleasure of my tiny audience.

The main point, as I see it, is quite simple, and it has little to do with RG3.  Of course he wanted to play.  Of course he said he was fine.  And of course he played when he shouldn't have.  He's a young man, the leader of the team, and a ultra-hyped draft pick.  It's not his job to make calls for the team, it's his coach's.  It is the responsibility of the head coach to A) keep his players safe, and 2) win the game.  It was obvious to anyone watching that RG3 couldn't play at a high level and that, at halftime, had the team come out with Kirk Cousins as their QB, they had a great chance to win the game.  Mike Shannahan should have made that call.  It is his duty to his team to make the tough decisions, like benching the most popular player in football when he is about to injure himself so badly that it might jeopardize his career.  No, you're not his dad.  And yes, he's a grown, albeit young, man.  But it's YOUR team at that moment, coach.  You have to do what's best for your player, his future, your team, and IT'S future.  The right move was benching RG3, and Shannahan missed it.  That's why the Redskins lost and that's why his star QB might not be ready for the beginning of next season.
Posted by Olie Coen at 3:58 PM