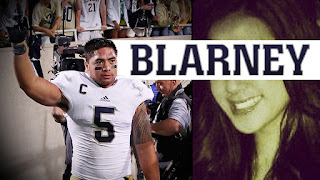 I had another post all lined up for today, but I can't pass this by.  The world of sports radio, websites, and TV is talking about Manti Te'o, and I just can't resist.  Before we continue, read this article:

Ok, so I'm not a huge college football fan, my loyalties are with the NFL.  But even I heard about the heartbreaking story of Manti Te'o; he is the emotional leader of the Notre Dame Fighting Irish, he is a Mormon among Catholics, his grandmother passes away, and shortly after his girlfriend also dies.  Very heartbreaking, everyone rallies around him, he's all in the news, quite the story.  And now, the fun begins; he never met his "girlfriend".  She's not a real person.  She didn't die.  Someone made her up and used a Facebook picture of some other woman.  Supposedly Te'o spent hours talking to ...someone ...on the phone every day for months as "she" went through chemotherapy.  It's a very confusing story that no one understands, and probably never will.  But man is it entertaining.

Everyone is weighing in on this topic.  Te'o and Notre Dame say that he was a victim of a hoax.  Ok, maybe.  Supposedly a man made this all up to fool Te'o.  If that's true, who was he talking on the phone with for four hours every night for four months, as he claims?  Some people think that Te'o and another man made up the hoax together to fool the media.  Alright, perhaps, but ...why?  Others think it's a combination of the two somehow, and that is also possible.  One interesting person who is adding his two cents is Nev Schulman.  He and his brother created the movie Catfish, a documentary about Nev's online relationship that turned out to be a hoax.  Now there is an MTV show called Catfish as well, with Nev as host, uncovering other such rouses.  Schulman says that he understands Te'o's plight, that hoaxes can happen to anyone.  The problem is, Catfish itself was a hoax.  It's not a real movie.  Schulman created a film that plays as a documentary, but is totally fiction.  So, a man who created hoaxes is supporting a man who was hoaxed ...don't try to make sense of it.

However the story ends, at least we all had a little fun.  The loser here is the American sports media, who covered Te'o and his tragedies ad naseum, and who now look a little foolish.  Te'o will be drafted into the NFL next season by some team who probably doesn't care whether or not his girlfriend did or did not exist.  But this story will forever follow him, hoax or not.
Posted by Olie Coen at 11:46 AM