Book Review - The Sirens of Titan 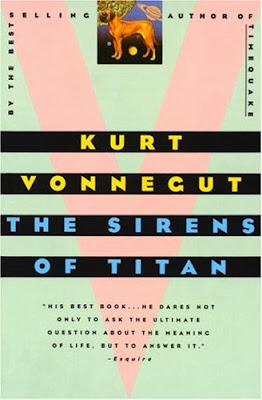 
I would say that my favorite author is Stephen King.  I understand that some people don't like his work, and I also understand that he's not a very unique choice for a favorite, but he has ability to draw me into the worlds he creates like no one I have ever read before.  His stories are fun to read on the surface, but also extremely deep if you care to jump in.  The only other author who comes close is my second favorite, Kurt Vonnegut.  His books are more overtly meaningful with less of a popular element to catch the eyes of people who are looking for a page-turner.  That's not to say that he doesn't write entertaining stories, because he does, but they are obviously metaphorical, where King's could just be taken at face value if that's what you choose to do.  Anyway, Vonnegut is an amazing author who I've read well, even though this is my first review of one of his books.  The Sirens of Titan is one of his earliest novels, one that gained him a lot of fame, but also one that isn't as strong as his later works.  That's not to say that it's not good; it's still a fascinating story with an incredibly rich message, one that ought to be read, discussed, and enjoyed.

Meet Malachi Constant, the richest man on Earth.  He has extreme good luck, as did his father, and he does what he pleases with his money with not a single thought for the future.  When he meets Winston Niles Rumford & his wife, events are set into motion that will lead to the collapse of Malachi's fortune, the ruin of his business, and his eventual travel to the planet of Mars.  There he unwillingly becomes a part of Rumford's plans to invade Earth, to conquer it using Martian troops and advanced alien technology.  But Malachi revolts against this path, leading him on a journey through space & time that he never could have imagined.  And the secrets that he learns about the point of the universe & the meaning of human life will change his world forever.  He will meet his soul mate, father a son, repair a broken robotic alien, live on a great number of planets, become the entire Earth's whipping boy, and grow old during an adventure that never seems to end and always remains astonishingly random.

How's that for a summary?  The book doesn't really make much sense if you break it down into events.  The first part is pretty boring; rich people talking about the future and the author giving us the story of Malachi's family fortune.  But powering through that portion you arrive at a place in which the action never stops.  A war between Mars & Earth, glowing space creatures that spell out messages, a religion formed around chaos theory, space ships that fly themselves, voodoo dolls in the form of Malchi Constant.  The events are weird beyond description, but each one has a meaning, a deeper purpose that leaves readers pondering the great questions of the world.  And that's, I guess, the point of the story; to get you questioning the world, your purpose, intelligent design, God, the future, destiny, fate.  All the big questions come up, some of them are "answered", and others are left for you to figure out.  I enjoy a story in which I'm left to think for myself, to create my own theory to explain the hows & the whys.  And Vonnegut creates such a story here.

It's not his best book perhaps, but it is one of his early works & he can be forgiven for not creating a polished masterpiece.  Vonnegut himself grades it an A, and I would be hard pressed to disagree, although I liked some of his other books far better.  Cat's Cradle, Slaughterhouse-Five; now those are great novels; incredibly excellent stories with the patented Vonnegut weirdness and some mind-blowing messages to deliver.  He likes to throw a little bit of sci-fi into all his books; this one just happens to have a ton more than usual.  But that's not to say it's a sci-fi book.  The technical aspect isn't there, he's just using space as a backdrop because it allows for so much, his imagination can run wild without too much critique or correction.  And for this story it works; an outer space tale about the meaning of life as told by a man who fell into the events of the book randomly.  There are a lot of funny moments, odd happenings, great quotes, weird characters; all the things you could want from a Vonnegut book.  If you are already a fan chances are you'll like this one too.  If not, I would recommend trying a different one of his works and coming back to this one when you've gotten a little acclimated.  This one's kind of out there; good, but strange, and perhaps not one you want to read as your first Vonnegut experience.