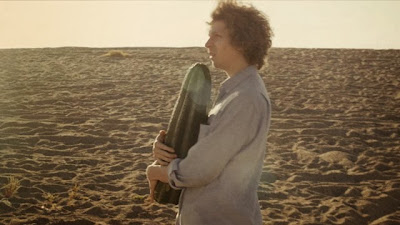 
The actual title of this film is Crystal Fairy & the Magical Cactus and 2012.  That ought to tell you all you need to know about this movie.  It's weird, let me just put that out there.  It's weird in the way that many drug stories are, portraying a culture that I, thankfully, know nothing about.  But that makes it hard for me to really comprehend what the characters are feeling, what is driving them on their quest for the perfect drug.  Every once in a while someone makes a movie that's about people who happen to take drugs, not drugs themselves, and it's those films that I can actually connect to.  This one tried to get there, but never really quite managed, despite some good acting and a so-so plot, making it just another strange & wild trip.

Jamie is a young man with one thing on his mind; the famous San Pedro cactus.  He has traveled far in search of this hallucinogenic plant, building it up in his mind as the ultimate drug experience, one that will blow away all the cheap drugs that he's done so far in his youth.  With his friend Champa & his brothers in tow, Jamie starts a road trip that he hopes will end in amazing enlightenment.  But he made one mistake on this path to perfection, and her name is Crystal Fairy.  Crystal is a girl Jamie met randomly at a party, talked to while high, and apparently invited along.  But now that she has arrived, he is sure she'll mess up what was supposed to be a man's weekend with her strange hippie ways, her crazy talk about auras & magic stones, and a general positive energy that Jamie can't stand.  The two will have to learn to get along so that they can both enjoy the magic cactus and what might be the best thing to happen to them all year.

Like I said, it's weird.  I mean, it's a story about a group of young people whose sole mission is to boil some cactus juice, get high on it, and see life differently.  It's a plot that turns out to be a little boring actually, and it's only saved from total crap by some surprisingly good acting.  I like Michael Cera, some people don't, but he was really good in this one.  He was intentionally unlikable, pretty assy, and funny in a very awkward way.  What caught me off guard was Gaby Hoffman.  She was a completely different person than what we've seen from her before, or at least what we know her for: Sleepless in Seattle, Now and Then, Volcano.  In this one she was intentionally ugly, with a uni-brow and a look that said she hadn't washed in some time.  She was hairy, grungy, and for some strange reason very often naked.  The nudity itself was shocking and not meant to be enjoyable.  I guess it was there to make a point, to make audiences uncomfortable, and to show the free spirit of a character who was quite opposite from the one played by Michael Cera.  But regardless, the entire movie was an oddity, a slow-moving adventure with no great point.  I have no idea who I'd recommend this to, perhaps no one, and I definitely wouldn't watch it again myself.