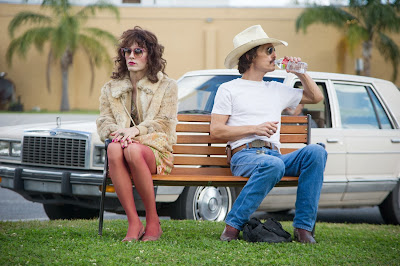 
Talk about surprise Oscar buzz.  Here is a film that was flying way under the radar and then leaped into the conversation.  What changed?  People saw it.  It's a pretty good sign when no one is talking about a film and then as soon as advanced screenings run their course no one can stop talking it.  When I first saw the trailer in August I thought it looked edgy, interesting, and well done.  But I had concerns about the cast.  I knew Jared Leto would be good, but Matthew McConaughey is a really big wild card, delivering awful & wonderful performances seemingly at random.  But my biggest concern was Jennifer Garner.  There aren't many actresses that I enjoy less; I just can't stand her acting "style" nor do I really like looking at her on screen.  I know that's my problem, but I think a lot of people had reservations about this cast, leading to it's underwhelming aspirations.  Then I actually saw the film and realized why it's now going to be an Oscar contender.

The story follows 80s cowboy Ron Woodroof.  He's a rodeo rider, a gambler, a drinker, an addict, a con man, a ladies man, a trouble-maker, and a rebel.  But when he finds himself in the hospital after an accident he learns that he's one more thing; an man who is HIV positive.  The doctors give him 30 days to live, but that's not enough time for Ron Woodroof.  He sets out to get the drugs that might save his life, only to find American law to be way behind the AIDS epidemic that is sweeping the nation.  So he goes to Mexico, and what he discovers is that there are other "cures" for the disease, other ways to manage it without destroying your body from the inside out.  And there are people in the U.S. who are willing to pay anything for these drugs, willing to make a millionaire out of the man who can bring them life in a bottle.  With the help of his new & unlikely friend Rayon, Ron starts a business that will make him rich, save his life, and perhaps give it an actual purpose.

What helps this film make such an impact is that it's a true story.  Ron Woodroof was a man with AIDS who defied the system and attempted to make a difference.  He directly affected the laws surrounding FDA approval, the treatment of the virus, and the way those who were sick were viewed.  The director, Jean-Marc Vallee, did a great job of letting the story speak for itself, allowing the action to dictate the flow & feel of the movie, and giving his actors space to share the story through the characters that they developed.  I can't see him or any other member of the crew getting much credit for the success of the film.  Because it was successful, but in the way that Argo was, with a story that was powerful by itself and didn't need a strong director to help deliver the punch.  I understand now the Oscar buzz surrounding the film; it was strong, well-made, and about an important topic.  But it was the actors who brought it to that level.

I would be extremely surprised if Matthew McConaughey wasn't nominated for a Best Actor Academy Award.  His performance of Ron Woodroof was probably the best of his career.  He played him realistically, passionately, and without holding back anything.  The torture he must have put his body & his soul through to really fill this role must have been incredible.  I know that sounds dramatic, but it's a acting job that deserves a large amount of respect & awe.  Jared Leto wasn't far behind as Rayon, Ron's business partner and unlikely friend.  He was solid, lovable, honest, and a great compliment to the story.  And even Jennifer Garner wasn't horrible.  Her part was much smaller than I thought it would be, and she actually did a good job with the little she was called upon to do.  All in all, Dallas Buyers Club is a good movie with an amazing story and some incredible acting.  The actors were better than the film & the film wasn't as good as the plot.  But it's one of the movies you have got to see this year and one that should be well-represented in March. 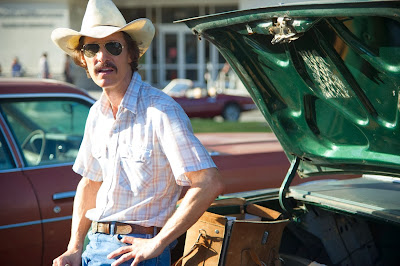