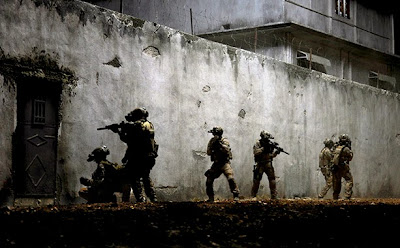 
I didn't get the big deal about The Hurt Locker.  Kathryn Bigelow was on every body's hot list, the movie got rave critic reviews, and it even won the Academy Award for Best Picture.  I thought it was just alright.  The story was cool, sure, but it was a real life situation that automatically elicits a ton of emotion, not a great original plot that deserves a lot of credit.  Jeremy Renner didn't even do that great of a job, and his role was pretty generic; the maverick soldier who is slightly traumatized & kind of heroic.  So going into Zero Dark Thirty I imagined I would get a repeat; a film about war, well-made, but without a great actor & about subject matter that speaks for itself and doesn't need over dramatizing to be effective.  Well that's exactly what I saw, but again most critics saw a wonderful work of art where I just don't think one exists.

The topic of this movie is anything but broad.  It is a depiction of the real life events leading to the killing of Osama bin Laden after his apparent lead of the attacks on 9/11.  More specifically, the film follows the one woman war of Maya, who is obsessed with the terrorist's capture and spends her entire government career attempting to bring him to justice.  The subjects that the story touches on are both deep & troubling: torture, the detaining of political prisoners, American foreign war plans, the CIA.  And while these story lines exist, the focus remains on the intel, the process, and the execution of the final goal; the removal of one of the greatest single threats to American safety.

I guess, in the end, I just don't see why the majority of people think that this and Bigelow's other projects are so great.  Yes, the subject matter is very interesting.  She's banking on the fact that this is information that we want to know & that we probably want to see on screen.  The CIA details, the passion behind the chase, the elimination of such an influential historical figure; all of that is cool to see & well-detailed.  But it's the part that makes a movie a movie that I didn't enjoy as much, and to me that's a problem.  I thought Jessica Chastain was bad; not just OK, but pretty awful.  And I need a strong lead actor to help me enjoy the story even if the topic is inherently intriguing.  Some people don't care as much and can be a little more forgiving, but I can't.  Weak acting paired with mediocre directing and a cool true-life plot.  That gets you right in the middle; not a bad movie at all, but not an Oscar-worthy one either.