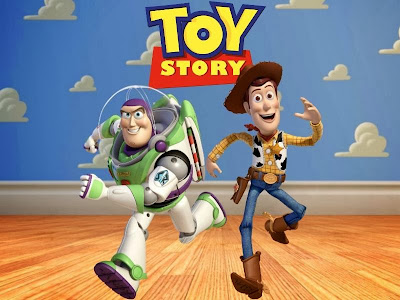 
Talk about a beloved classic.  This animated children's movie has, cheesily, touched the hearts of a lot of us, becoming part of our childhood or of our children's movie collections.  So it's a standard now, but it was once a ground breaker.  It was the first film of the Pixar animation company, teaming with Disney to produce a blockbuster computer generated movie, an art form that was just blossoming.  And of course from there Pixar has made many more excellent kids' pictures: A Bug's Life, Monsters Inc., Finding Nemo, The Incredibles, WALL-E, Up.  But you could argue that none are better than the one that started the trend, the movie that began a movement and renewed our interest in animation not just for a few years, but for decades to come.

Toy Story could not be a more accurate title.  It is a story about toys, their lives, and the important role they play in the development of children.  Woody the cowboy and his friends are the toys of Andy, a nice boy who plays with them all but has a special place in his heart for his wild west buddy.  What he doesn't know is that his toys come to life when he's away, interacting together & planning on how best to make Andy happy.  Their routines all change upon the arrival of a new toy, a Buzz Lightyear space ranger.  He's cool, he flies, he's got a laser, and he thinks that he's really a crashed space pilot.  Woody tries to make him understand that he's just a toy and eventually tries to get him out of the picture when Andy starts favoring Buzz over Woody.  But the two toys need each other when they become lost, forced to work together to get back to the boy who loves them.

There is something in this movie for everyone to like.  For kids it's silly, fun, adventurous, bright, and overall enjoyable.  For adults there's the patented Disney hidden gems, the clever comments, the slightly adult humor.  And the animation can be enjoyed by everyone.  The colors are so beautiful, the characters so elaborate, the shadows & all details done with meticulous care.  Visually it's a stunning movie that has perhaps been outdone since but will never be diminished by time.  And the story itself is classic; friendship, love, purpose, overcoming obstacles.  It's a film that can be watched over & over again and never gets old.  The voices are well done, Hanks & Allen; they are perfect for their roles and help to make the toys come to life in a way that even the animation can't deliver.  An extremely popular movie, it's hard to imagine that you haven't seen it.  But on the off chance that you missed it, please go correct that mistake.