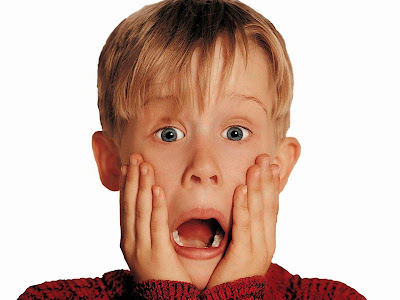 
This might be a Chris Columbus film, but man does it have John Hughes written all over it.  Of course, Hughes did write the script, but he had more to do with the movie than just putting some words down on paper.  He personally campaigned for the lead role to be given to Macaulay Culkin, who he had previously worked with in Uncle Buck.  Jon Candy too as a matter of fact, who also appears in this film.  And the world in which the story is set is 100% Hughes; a small town in Illinois, a dysfunctional family, childhood angst, some crass humor wrapped in a heart-warming lesson.  If you've seen his other projects you'll feel him right away; Sixteen Candles, The Breakfast Club, Weird Science, Pretty in Pick, Ferris Bueller's Day Off, Planes Trains & Automobiles, Christmas Vacation, just to name a few.  It was a sad day when Hughes died at the age of 59; the film world lost an amazing talent, a writer & director who was a genius in his own right and someone who gave us movies that we will never forget.

In Home Alone, Hughes & Columbus introduce us to Kevin McCallister, the youngest child in a family of five kids.  He feels like the goat of the group, the one who gets blamed, the one who gets overlooked.  And is he ever overlooked when his family prepares for a trip to Paris for the holidays.  During a hectic morning, Kevin is forgotten, left alone in the attic while everyone else flies away.  And although his mom realizes her mistake fairly soon, it's incredibly difficult for her to get back to her son, due to Christmas air traffic.  Kevin, meanwhile, thinks he wished his family away & is pretty happy about that.  That is until he realizes how alone he actually is.  A pair of bumbling cat burglars are preparing to pull off the theft of the century, stealing from every house on the block whose residents are away on vacation.  But they don't know Kevin, and they don't know to what lengths he will go to save his house, protect his territory, and make his family proud.

Talk about a classic Christmas movie.  This is one that I have got to watch every year.  It puts me in the mood for the holidays, teaches a good lesson about being careful what you wish for, and is ultimately about the love & warmth of family.  But along the way it's also hilarious.  Much of the humor is juvenile, some is silly, a lot is physical, but it doesn't really matter.  You can be any age and enjoy the wild ride, the ribald jokes, the smacks to the face.  Because it's never dumb; Hughes & Columbus keep it smart if not exactly high class.  And the acting is excellent as well.  Culkin looks the part more than he acts the part, but he's not bad for a kid.  Joe Pesci as the lead bad guy is superb and Catherine O'Hara as Kevin's mom is appropriately guilty & slightly crazy.  The side characters never detract from the story, and the music is surprisingly excellent until you realize that it was composed by John Williams.  All the pieces fit together, making Home Alone a holiday classic, a comedic masterpiece, and a must-see film.