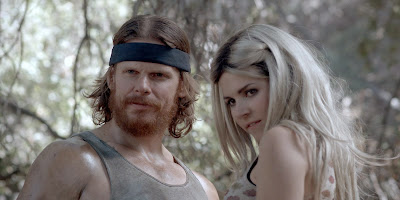 
I've seen my fair share of slasher flicks and I tend to enjoy them.  I know they're not for everyone, but if you're a fan of the genre you know what to expect when you sit down to watch one and you're usually not disappointed.  Blood, boobs, screaming, running, spooky woods, creepy killers, a hero, a tramp, a pothead, a good girl.  It's not an extremely difficult formula to follow, it's been done a million times, and it's kind of hard to get wrong.  That's not to say that there aren't good & bad slasher movies.  They might follow the same basic plot, but they could be ridiculously stupid on purpose, horribly funny on accident, a complete mess, or a surprisingly good film.  Trail of Blood is not a great movie, of course not.  But it is a well-made psycho killer rampage that fits into the classic style but delivers one of the better versions that I've seen. 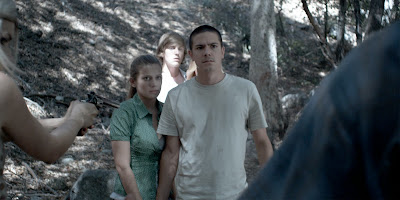 The story is one you've heard before; a group of friends go hiking in the woods.  They are young, attractive, carefree, and are just looking for a good time.  The characters have been done before as well.  Jim the responsible one who has a plan for his future.  His girlfriend Andrea who's cute, nice, and marriage-worthy.  Her sister Dana, hot & spoiled.  Her boyfriend Adam the weed guy.  And also a couple of friends to round off the group; David, Angel, Mandy.  The group enter the woods on a beautiful day, begin to set up camp, to explore the area around them, and that's when they uncover a deadly secret; there are bodies in the forest, fresh bodies, and the killer may still be on the loose.

And when another couple joins them, things really get interesting.  A Marine & his girlfriend take the crew hostage, demanding that the killer reveal himself.  But the truth that is revealed is that the Marine himself may be the most dangerous person in the woods and that his sanity may be long gone.  Apparently he is on the run, a Section 8 ex-soldier who never recovered from the brutality of war.  The friends only hope of survival is to do as he says, even when their group begins to suffer one by one.  But hope is on the way in the form of two special agents who are hot on the trail.  Will they get there in time, or will blood be spilled & chaos reign? 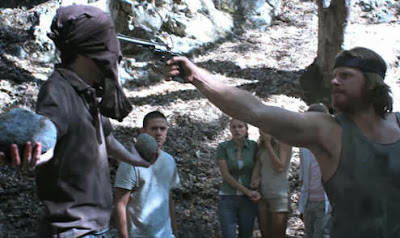 It really could have been much worse.  Someone did a great job of stepping right up to the edge of corny & stopping just in time.  They never crossed the line into b-movie territory, keeping just enough integrity to not be called a farce.  The directors, the editor, someone was there to keep a discerning eye on the plot, not letting it get out of control.  The dialogue wasn't as stupid as some in the genre, the action wasn't quite as silly.  The plot actually make a little bit of sense, which is always nice, and people weren't doing the exact opposite of what we are yelling at the TV for them to do.  It's as if the writers decided that the characters could actually be human, that they could keep their brains, at least long enough for them to get blown to bits.

Because it still was a slasher film.  It didn't stray too far from the genre that it ceased to be a bloody romp through the deadly woods.  There was still a ton of gore, people being shot in the head left & right, throat slashes, bright red fake blood, everything you could ask for.  It was just done slightly more believably.  And the girls were still good-looking & wearing tight clothes, the guys still slightly pathetic & pimply.  The killer was terrifying, the situation hopeless, just as you'd see in other films of this style, so the basic elements weren't thrown away.  They were just done slightly better than they usually are, which may actually be off-putting if you're looking for more stupid & less real, which I wouldn't blame you for.

The acting was actually OK too, which was pretty shocking.  Usually it's as if the casting crew went out and found the worst actors they could find, gave them three lines before they die, and called it a day.  Movies like this don't seem to have much effort put into them, but this one did.  Now, the action did seem like it was shot all in one day in one spot in the woods with time standing still, so I'm not saying they put a lot of effort into the production of the movie, but at least the actors held their own.  Especially Torseth the Marine and Erickson the good girlfriend.  They actually had characters and switched between emotions.  Stunning, I know, but they brought their A-game and helped to make Trail of Blood something slightly more than throw-away horror. 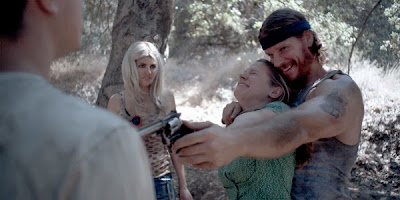 Video - With an aspect ratio of 1.78:1 the video quality is good but not excellent.  The film was shot using a Red One camera and is perhaps a step up from your normal b-movie low quality, but it still doesn't boast an amazing picture.  All the action is set in the woods during the day, so the visuals actually get a little boring after to a while.  No glaring errors in transfer or levels, but nothing remarkably impressive either.

Audio - The film was done in Dolby Digital and the disc has an option for either English or Spanish subtitles.  The sound quality of the film was fine; again nothing special.  The sound was mixed & balanced well with no obvious problems, but it's nothing to write home about.

Extras - There are a few extras on the DVD.  Commentary with directors Joseph & Justin Guerrieri can be turned on & enjoyed alongside the feature.  And there are five trailers: Trail of Blood, Among Friends, Killer Holliday, Primitive, and Curandero.

Rent It.  For a slasher film, Trail of Blood delivers an acceptable story told by adequate actors.  While that may not sound like much, it's more than you get from a lot of others in the genre.  Don't come expecting something amazing and also don't expect complete crap.  Somewhere in between the two lies this movie, a well-made horror story that is likeable but far from lovable.  The video & audio qualities are fine & the extras are present, but the DVD isn't a cinematic wonder.  Watch it with low expectations and you might be pleasantly surprised.