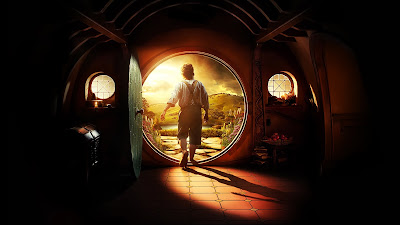 
I just wrote a review for the book The Hobbit that this film is based on.  We all know the basic story, most of us have read it or The Lord of the Rings, and the movie versions of those novels were extremely popular.  But although the story is well-know, some people have a love for the original books that hampers their ability to enjoy the films.  I didn't have that problem with Peter Jackson's first three takes on the classic fantasy novels.  I though he did as good a job as he could, cutting out very little, adding in only a little extra Hollywood.  The movies followed the books as well as could be expected and I think most people were pleased.  The problem that got my attention early on this time was that Jackson would try to split up the The Hobbit into three movies.  Curious, considering three movies were enough to cover the three long Lord of the Rings books but the same amount of time would be given to a short Hobbit story.  I didn't know what to expect really, what filler he would have added to a near perfect plot, what improvements he could possibly make to one of the best books that has ever been written.  As it turns out, it might be easy to make up pieces to add to the adventure tale but it's not so easy to do it well.

The first of three movies covers the first part of Bilbo Baggins' journey with a team of brave dwarves.  They are on a quest to retrieve their long-lost family gold, taken from them by a marauding dragon named Smaug.  The dwarves, led by Thorin Oakenshield & Gandalf the wizard, hire Bilbo to be a member of their parry and to do a little burgling when they get to the Lonely Mountain far in the east.  But getting there won't be easy.  The troupe is being hunted by evil Orcs and their wolf mounts, led by a pale orc captain who has a personal vendetta against Thorin.  Through the dangerous, troll-invested wild lands, into the lush green valley of the elves, over the Misty Mountains; wherever the group travels the Orcs are close behind.  And only Gandalf knows the depth of their quest, what evil is plotting behind the scenes and quickly gaining power.  Poor Bilbo is just along for the ride, trying to stay alive despite his small size.  But when he becomes lost deep withing a goblin stronghold, he meets a strange creature named Gollum, shows his true courage, and gains an important treasure that will become the most important piece in a war that is just over the horizon. 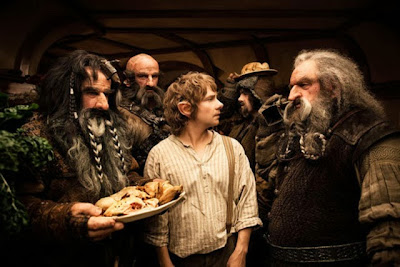 And so the movie ends, fairly abruptly, as the dwarves cross the Misty Mountains and prepare for the second leg of their quest.  Three hours was a long time to devote to such a small section of the book, and needless to say there were a few things added in just to stretch the story.  To his credit, some of what Jackson added in were subplots beneath the main story that weren't talked about much in the original book but were going on & were very important.  Gandalf meeting with the Brown wizard, hearing rumors of the arrival of the Necromancer; those were interesting behind-the-scenes moments that actually added to the plot quite nicely even though they weren't in the book.  However, so much was added just because & most of that was pointless action.  A silly battle with the trolls, constant fighting with the Orcs, a climactic battle between Thorin & the pale orc; none of that is in the book.  Call my a purist, but The Hobbit is an incredible story; why are you adding stupid action to it?  Peter Jackson did such a great job with the Lord of the Rings movies; why abandon the script & go rogue?  Those superfluous scenes that were added weren't fun, necessary, helpful, or well-handled.  They were CGI action shots that felt totally out of place and were only meant to add time to a bloated film & to attract ignorant audiences.

It wasn't all bad, it's just hard for me to get over how much was completely fabricated.  If the book was so-so I'd be all for adding a little for entertainment value.  But the book is funny, heart-pounding, well-written, and basically above editing.  And to make matters worst, when the movie stuck to the book the scenes were excellent, making the "bonus material" seem even crappier by comparison.  The classic meeting between Bilbo & Gollum was very well done; believable, captivating, creepy, and followed the text cleanly.  When the words are so well written and make for such good cinema already, why change them?  It makes fans like me angry and it lowers the quality of your film for everyone.  At least the visuals were great; that land that they created is just so cool, so rich with color & with detail.  And that music; the theme songs now have the power to transport us directly to the world of Middle Earth.  So it's hard to say it was a bad movie, because the story is epic, the characters are well developed, the music & scenery are beautiful.  It's just that this film, more than the others, relies too much on forced action, borrowed themes, second-hand success, and doesn't deliver a good movie version of a great book.  We were already on board, we already liked the books & other movies; all this film had to do was give us what we wanted.  It didn't, not at all, it threw away a plot that's proven & went instead with a bloody mess that only barely reflects the original excellence of the book.  I am now very worried about the second & third movies.  Very worried. 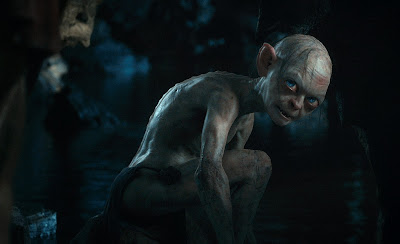