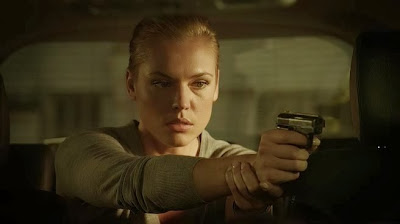 
If you've ever watched an episode of Silk Stockings then you have seen this movie.  I remember that show and the USA network being risque when I was a kid, pushing the boundaries of what you could show on television.  Looking back it seems extremely tame & a little silly.  The movies they played, the shows they produced, everything was supposed to be edgy but really wasn't.  Remember Le Femme Nikita?  I used to try to think of sneaky ways I could watch some of it late at night.  I'm not really sure why, cause they never showed anything, never really did anything, and that's how Breaking the Girls played out; it's a movie that seems like it might be dark & sexy but turns out to be just another cheap thriller.

Sara is a poor college girl trying to make her way on her own.  She secretly loves a boy named Eric, but he has a girlfriend, Brooke, and she hates Sara about as much as Sara hates her.  Things change when Sara meets a local rich girl named Alex, a spoiled but fun-loving rebel who has troubles of her own, mainly a step-father & his bitchy new wife.  Alex & Sara bond over their past tragedies & their current problems, leading to a joke that they should each kill each others' nemesis.  But when Brooke turns up dead, it's not quite as funny anymore.  Sara knows that Alex did it but can't prove anything, and she herself becomes a prime suspect in what is quickly becoming a complicated case.  New secrets are revealed, backs are stabbed, and this wild ride won't be completely over until the final credits roll.

Well it wasn't what I expected, but it wasn't completely awful.  I thought it would be edgy, cool, provocative, entertaining.  It wasn't really any of those things, but it turned out to be a copy of the movies I thought were risque in my youth and so I found myself enjoying it anyway.  There wasn't really much blood, no nudity, nothing shocking except for a little lesbianism.  And yet it was kind of fun in a throw-away murder/thriller kind of way.  I wish the acting had been better, as Agnes Bruckner was fairly awful & Madeline Zima only slightly better.  If it weren't for my nostalgia for USA movies, I doubt I would have found much good to say about this film.  But as is it, I liked it enough for reminding of the crappy movies that I used to find "adult".  That's something I guess, although it isn't much.