This was the movie that I was the most excited about the entire year.  After all, it had all the parts in place to be a phenomenal film.  David O. Russell has proven that he is a great director with movies like The Fighter and Silver Linings Playbook.  They were Oscar caliber, audience favorites, and strong all-around.  The actors are a mix of proven veterans and up-and-coming talent: Bale & Adams having worked together in The Fighter, Cooper & Lawrence the dramatic duo of Silver Linings Playbook.  Add Jeremy Renner to the mix, an awesome 70s soundtrack, a cool con vibe, and you've got yourself a film that's tailor-made for an Academy Award.  And after seeing it, I'm sure it'll be nominated many times over, deservedly so.  But I don't see too many victories in American Hustle's future.  It was a great film, no doubt, but it fell short of perfection and/or emotional relevance which will doom it to mediocrity come March.

It's a complicated plot that drives the story of this crime drama roller coaster.  Irving (Bale) is a professional conman.  He's got his fingers in more pies than he can count and is making money hand over fist thanks to the gullible public.  His wife Rosalyn (Lawrence) stays at home with his adopted son while he picks the pockets of desperate people, doing her nails, her hair, and reading fascinating articles.  True love enters Irving's life in the form of Sydney (Adams), a fellow conman, actor, and adventurer.  They are happy together and all is well, up to the point where they get caught.  Young FBI agent Richie (Cooper) busts the pair for fraud, but he's after bigger fish.  He wants the duo to create a con, a giant trap to ferret out politicians with sticky fingers.  Irving & Sydney are along for the ride, creating the con of the century to catch New Jersey's own Mayor Carmine Polito (Renner) and any twisted crooks who fall into the pot.  But who's tricking who, who's over who, and how will the twisted story end? 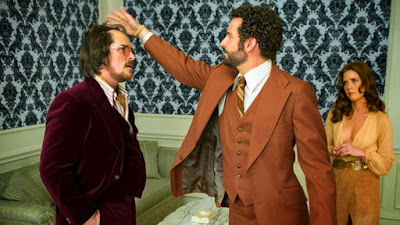 At the very least, the acting in this film is incredibly strong & entertaining.  Bale as the slick trickster with the nasty comb over is excellent; greasy, greedy, kinda gross, but ultimately lovable.  Adams as the ex-stripper, the girl who wants more, and the professional con-lady is great; cool accent, awesome outfits, and believably in love.  Cooper is just OK as Agent DiMaso; if annoying & immature was what he was going for than he succeeded.  And Renner was the best I'd ever seen him as the young do-gooder, a role that suited him much better than the one he played in The Hurt Locker.  But it was Jennifer Lawrence who stole the show.  She was incredible as Rosalyn the ditsy Long Island blonde.  She brought humor to the film, some levity, and a nice relief from the pressure of the heavy plot.  Of all the actors, I think she has the best chance of an Oscar with a Best Supporting Actress.  Both Bale & Adams might be nominated, but their performances weren't amazing, just great.  That might seen unfair, but they & Russell will be held to very high standards that they might not meet.

Speaking of the director, he did a fine job.  The movie was fast-paced, clever, interesting, strong; everything you want a film to be.  But it wasn't special.  I didn't leave the theatre saying "wow" or carrying a certain feeling home with me.  The story was delivered nicely, and it was a partially true story which helped to solidify the plot, but it never transcended my expectations, never became the stellar project that I had hoped it would be.  Two things the film lacked were sex & violence.  Now, I'm not saying it had to be bloody & perverted to be good, but a little added heat & reality would have helped to make the story gritty & believable.  A little grit would have gone a long way, made it seem a little less safe.  Comparing it to a film like The Departed which was incredibly violent makes me wonder why they didn't take a step in that direction.  Scorsese hit that one out of the park, while Russell kept this one just inside the fences.  It's a tame version of a great crime story, one that featured amazing actors in parts, but failed to be wonderful.  I still think it will get nominations and I still enjoyed watching it, very much so; it was a good, good movie.  But I wanted it to be the best movie of the year and it just didn't quite make it. 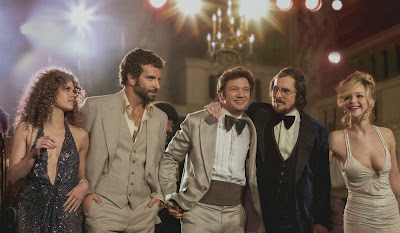