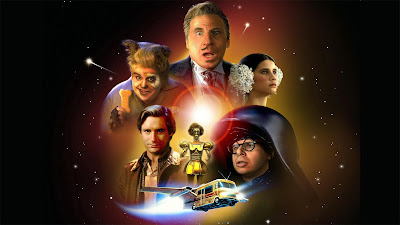 
You're either a Mel Brooks fan or you're not.  His movies have a certain feel, a certain odd humor that either cracks you up or just confuses you.  I'd say his fan base is mostly male and mostly older, but I actually watched this movie with a bunch of tweens and they thought it was hilarious.  Then again, that makes sense, since a lot of the comedy revolves around vomit, people falling, heads on backward, and other sight gags.  If you've seen Blazing Saddles, Young Frankenstein, History of the World: Part 1, or Robin Hood: Men in Tights you've pretty much seen Spaceballs as well; a farce that doesn't try to be too clever but is just stupid enough to enjoyable.

In this Star Wars parody, the planet of Spaceball is running out of time.  They are almost completely out of air and their survival depends on the planet of Druidia where air is plentiful.  Dark Helmet, the leader of the Spaceballs, attempts to kidnap Princess Vespa, forcing her father, the King of Druidia, to give up his planet's air supply.  Druidia's last hope lies in an odd pair of heroes, two fast flying renegades who are tasked with saving the Princess.  But when Lone Starr & Barf rescue her, Lone Starr finds himself loving & hating this beautiful royal pain.  The Spaceballs are hot on their trail and the group must seek shelter on a desert planet, home to the fabled Yogurt, commander of the Schwartz, the power that controls the universe.  If Lone Starr can harness the magic & if he can defeat Dark Helmet, then Vespa and her Druish people might just be saved.

This movie is ten kinds of ridiculous.  It is non-stop joke, constant slap stick & innuendo, a wild romp from start to finish.  Be prepared for a lot of physical humor and a ton of silly dialogue.  Again, if you've seen Mel Brooks' other movies you know what to expect, and if you didn't like them you won't like this one either, but if you're a fan then this is the film for you.  For me the comedy got a little old by the end, which is how I always feel about Mel Brooks movies, but it got me laughing early, never let off the gas, and is still one of the classics of the genre.  You can throw good acting out the window along with any kind of discretion or class, but what you get is a hilarious flick that doesn't apologize for being over-the-top stupid and is likable despite itself.