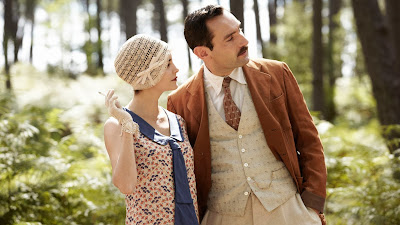 
It's hard to watch a movie with Audrey Tautou and not think about Amelie.  To me that's a Top 20 film, a defining one in the formation of my movie taste, and one that I will always love.  Audrey became Amelie, she embodied the spirit of the girl & the life that she lived so vigorously, and now it's difficult for me to separate the two.  It doesn't help that I've seen so few of her films, as she mostly does French pictures, and for some reason I haven't seen her American ones.  Perhaps I don't want to see her as anything but Amelie, perhaps I don't want that image shattered.  Well, consider it done.  The character of Therese could not be more unlike the character of Amelie, making me redefine the picture of Audrey Tautou that I had formed in my head.  Excellent acting goes a long way in making audiences forget your other roles, forcing them to see you as only your current character, and Therese was just strong enough to make me at least temporarily forget Amelie.

Therese Larroque is a wealthy French lady, a member of a landowning family who controls a large amount of pines and has developed prestige based upon their financial success.  Her best friend is Anna; neighbor, confidant, often opposite, almost sister.  Therese & Anna's older brother, Bernard Desqueyroux, plan on getting married & uniting their families' land.  The Desqueyrouxs own pines as well, and with the combination of both family fortunes they will become a quite powerful & very rich partnership.  And that's all the marriage will be; a partnership, a successful union.  Love does not enter into the conversation, and yet both Therese & Bernard are pleased with the plan, knowing that they will forever be secure, respected, wealthy, and comfortable.

And it is not their own indiscretion that threatens to mar this perfect pact.  Anna falls in love with a young man from a rich but disrespected family.  When she threatens to marry him and thus make the newly formed family a laughing stock, Bernard enlists Therese to talk sense into his willful sister, her romantic best friend.  And Therese succeeds easily, as the young man doesn't want a relationship, he was only giving in to his passionate desires.  This event casts a cloud upon the group, as Anna can never love or respect her friend again, and Therese begins to doubt the wisdom of her decision to marry so quickly, so unemotionally.  She will never feel the burgeoning love that she helped cut short, and her life will never be an exciting one.  And so when the chance comes to change her lot she takes it; not out of anger, not out of hate, but with the sad complacency of a final attempt that will assuredly fail.

I can't immediately forget my love of Amelie, how I've defined Audrey Tautou by the role, after seeing one strong performance.  Perhaps others don't have a similar problem with this particular actress, but I suspect that you know how I feel because you've done the same thing with at least one beloved character.  I know this is my issue and I can't blame the film for casting someone I only want to picture in a different role, but that doesn't change the fact that it was difficult for me to move past a movie & a character that I love so much.  I guess that's a danger that every actor faces, having one project stick in the minds of audiences and forever forcing them to be seen in one particular light.

And yet, despite by bias and to her credit, Tautou somehow pulled off this difficult task.  Perhaps she was aided by the fact that Amelie & Therese were polar opposites, characters who view life completely differently.  She embodied a morose, introspective, and unimaginative woman, someone who is practical & obedient to a fault.  But there was a depth to the character as well, an undertone that hinted at a desire to be none of these things, to break out and be free, loud, radical, and even dangerous at times.  Tautou did a great job of showing us both a facade and a boiling just beneath the surface.  Therese is a very interesting character, one that drove the film with the subtleties of her emotions and the barely concealed desire to burst free from everything she had worked to create.

Now, two hours of one woman battling with her inner turmoil is quite a lot to handle.  If it hadn't been for Bernard, played by Gilles Lellouche, the film might have become incredibly boring.  He was, in a very strange way, the comic relief of the movie, as much as a controlling & brutal man can be comical.  Or perhaps it was the way that Therese saw Bernard that was funny at times, as a boy in a man's body.  Because the humor of the film was lined with sadness as well, a pathetic despair that forces you to either laugh or cry.  I don't say this to make light of a serious plot; the story was tragic at times, heart-breaking, depressing even.  But there was a sense of companionship that I formed with Therese, an understanding of her plight and a chagrin for all her bad decisions.  Her character was one that was easy to relate to despite the era & circumstances of the plot.  A strong film that featured two great performances, but one that was slow at times, dark throughout, and carried a weight that was hard to "enjoy". 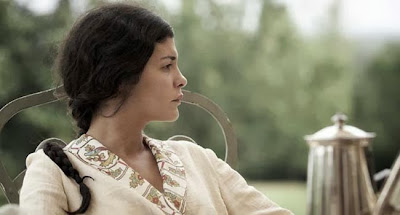 Video - With an aspect ratio of 2.35:1, the video quality is quite high.  The film was shot using an Arri Alexa camera with Fujinon Alura lenses.  The picture quality is rich & sharp, with a great use of light & shadows that really enhances the mood of the movie.

Audio - The film was done in Dolby Digital.  The French language disc has only one option; English Subtitles On/Off.  The sound quality is fine, with a little bit of nice music in the background, but nothing spectacular and nothing incredibly noteworthy.

Extras - There is only one extra on the DVD; a trailer for the film. 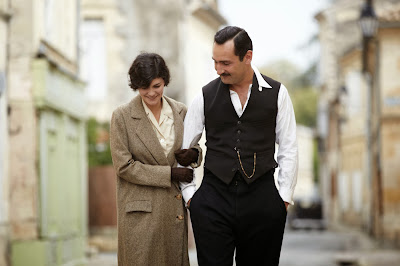 Rent It.  Therese features some great acting, if you like & appreciate Audrey Tautou, but the film itself is a little too heavy, a little too depressing without a saving grave.  There are times when the moments are very tight & highly engaging, but then there are others when the action is boring & the story is a little dull.  The video quality is strong, the audio fine, and the extras few.  A slow-moving emotional drama for sure, but a movie that's good if you've got the time to give it a chance.