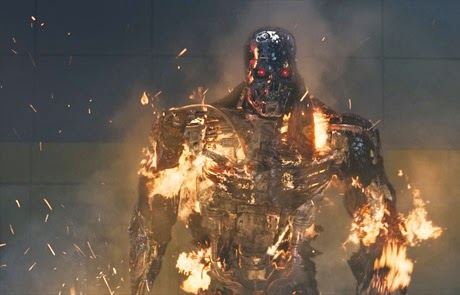 Before this film, there had been three movies in the franchise, a nice trilogy leading up to the war between humans and the machine.  In The Terminator (1984) an assassin was sent back in time to kill Sarah Connor, future mother of John Connor, the leader of humanity.  In Terminator 2 (1991) an advanced cyborg went back to kill John himself, but a classic Terminator was also sent back in time to protect him.  And in Terminator 3 (2003) John & his girlfriend Kate race to stop the global nuclear war before it can happen, attempting to prevent Judgement Day.  This isn't really a spoiler, because of course it does, but the war happens anyway, leading to all the events of the first three movies; the going back in time, the robot killers, Kyle Reese meeting Sarah Connor, John Connor growing up & becoming a military leader.  All this leads us to where we are now, in the "present day", during the battle between mankind and the computers that took over the world.

As with all time travel movies, the more story you try to weave the more confusing it's going to get.  John Connor is a grown man now, leading men against the machine.  He's not the leader, he's more a standard bearer, rousing the troops with his uplifting radio messages.  John knows, from tapes his mother Sarah left him, that he will someday meet a young man named Kyle Reese, send him back in time, and begin the series the events that lead to his own birth and the survival of the human species.  But finding Reese isn't going to be easy.  Pockets of resistance are scattered throughout the countryside, and the machines seem to always be one step ahead.  When a secret code is discovered, it seems as if humans are finally within reach of their goal; shutting down Skynet and their robotic army.  But a mysterious man named Marcus appears on the scene, with uncanny abilities and no knowledge of the global catastrophe that wiped out the planet.  As he searches for answers, John searched for Reese, both heading toward the same climax; a showdown with the machine that will alter the history of the world.

Terminator Salvation gives in and completely succumbs to the sci-fi/action intensity that has always been present in the Terminator story.  It goes all out; exploding everything in sight, introducing a thousand kinds of robot, showing us the wasteland that is America, introducing us to various packs of freedom fighters, decking everyone out in guns & bombs.  It's a ridiculously overblown action film with no room for continuation of the original story.  But that doesn't stop them from trying.  Plot lines intersect, twist, and scatter as new ideas are created, old lines are recycled, and everything becomes generally FUBAR.  There is no sense of the first film, or the second for that matter, keeping only the franchise name and leaving everything else behind.  Yeah the characters are the same and they refer to the other films, but it's basically a totally separate movie.  I wish the acting had been better, that might have helped some, but they weren't given much of a chance.  Bale, Worthington, Bryce Dallas Howard, Common, Moon Bloodgood, even Helena Bonham Carter; all very, very bad, like they were never supposed to be here, like they didn't fit.  Anton Yelchin was the only bright spot; I think he's an incredible actor.  But he couldn't save the film, it was too far gone.  Silly action, stupid lines, unbelievable sequences; I was left feeling very disappointed in a movie that used the well-known story instead of expanded it, chopped up a plot that I find very entertaining and turned it into just another crappy Hollywood sci-fi shoot-em-up.