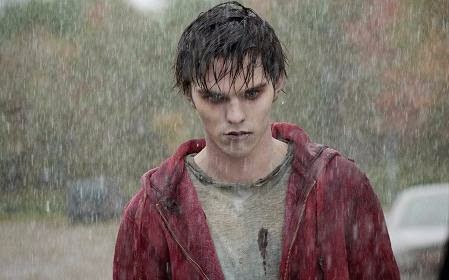 
The other day I was trying to figure out why we love zombie movies so much.  Of course not everyone feels that way, but zombie movies have such a huge following, such a cult status, there has to be something about them that draws us in.  And I think I figured it out; zombies are impossible.  Sure we like ghost movies, slashers, murder mysteries, horror in general.  But those stories scare us, people watch them because they sometimes like to feel scared.  Zombies aren't terrifying because we can't imagine them actually being real.  A creepy thing in the closet, yes.  A spirit in an old house, sure.  A psycho killer, of course.  But not zombies, they aren't realistic, and so we love them.  It's a cheap way to be a tiny bit scared, to be entertained, to watch a "horror" movie without being truly horrified.  It's a genre that works in many different ways because of this; apocalyptic, spoofy, semi-serious, and in the case of Warm Bodies, a comedy meant to prove a point.

As in countless films, the story begins in a world devastated by a plaque that no one understands and that, of course, reanimates the dead.  It's a classic set up; shuffling zombies filling the streets, humanity retreating to the relative safety of a militarized zone, survivors foraging for food among the corpses, the undead preying upon the living.  But the twist of this plot takes the tale in another direction.  When Julie and a party of young scavengers are attacked, the zombies kill almost everyone, except her.  For a reason unknown to Julie, one corpse saves her, protects her, and takes her back to his home.  Calling him R, Julie begins to develop a friendship with this strange, handsome zombie who seems almost to be able to feel, albeit in a limited capacity.  When the pair start their journey to take her back to the human settlement, R & Julie begin to warm each other's hearts; one more literally than the other, but both powerful beyond understanding.

Warm Bodies starts out pretty funny.  It's a humorous vantage point, that of an undead kid walking around reflecting on the bleakness of his life, the lack of excitement or connection with others.  The irony is fairly obvious and the laughs are a little cheap, but the beginning is definitely enjoyable.  When Julie comes along the story starts to fizzle, becoming just another teen angst movie, this time with zombies instead of vampires.  Someone like Tim Burton would have been needed to direct this movie and keep it dark & weird, rather than silly & tweeny.  As it was, all the interest I felt at the beginning didn't last long.  The actors weren't great, which may have been the problem.  Hoult, that kid from About A Boy, was just OK.  Palmer was pretty crappy as Julie.  And even Malkovich in a small role was forgettable.  I can't say I hated it, but past the strong opening I was left with almost no impression.  Definitely a nice take on the genre, with some good humor and a strong set up.  But no one involved was talented enough to keep the story moving, to make the film interesting all the way to the end.  All in all, a mediocre movie that you could take or leave.