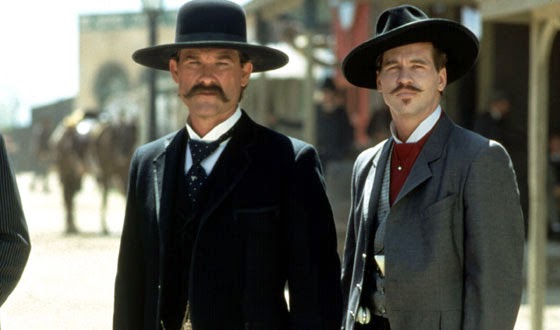 
What I've always said about Kevin Costner is that he's less of an actor and more of a guy who sometimes pops up in movies.  He'll usually give you the worst performance you'll see all year, because he doesn't actually have any viable talent.  But sometimes he'll stumble into a role, be himself, and it works for some unimaginable reason.  That's why Field of Dreams is so good.  Not because Costner is good, of course not, but because he's just a normal guy who likes baseball, just like Ray Kinsella.  And don't forget the key ingredient that makes the movie more than just a sports film; Ray Liotta.  He brings the magic, Costner brings the steady hand, and the movie works.  The same goes for Kurt Russell in Tombstone.  He's only a passable actor, but the role of Wyatt Earp seems tailor-made for his skill set, or lack thereof, with Val Kilmer providing the performance that takes the film from simple to stellar.

The famous days of the Wild West are slowly coming to an end, as fashion and order progress steadily across the vast plains and deserts of the great American continent.  Lawmen like Wyatt Earp have cleaned up many a small town, leaving peace behind them, if not in their own lives.  But Wyatt has decided that the time has come to give up his service and take some time for himself.  So he, his two brothers, and all their wives move out to Tombstone, Arizona, where silver has made life easy and money is rolling in.  The great Doc Holliday is also presiding in Tombstone, and the old Earp team gather again not to fight crime, but to get rich and live lavishly.  But their idyllic new life is quickly challenged by a gang of local outlaws, the Cowboys, a mob of men who take & do what they want.  Wyatt doesn't want to get involved, but he and his brothers can't resist the call of humanity, leading to the epic battle at the O.K. Corral and the cementing of an American legend.

The story of Tombstone is partially true, based on the rivalry between the Earps and the Clantons, culminating in a series of personal skirmishes and assassinations.  Wyatt Earp may not have been quite the Western hero that stories make him out to be, but that doesn't stop us from viewing him as one of the most famous gunslinging lawmen of that time.  Russell plays Earp well enough, falling into a character that suits him more than expelling much acting energy.  He, like Costner, is usually just himself, relying on scripts and his costars to carry him through.  And do they ever.  The story is pure cowboy, perfectly action-packed, with the classic lines & mustaches that we've all come to love.  The good guys are great, the bad guys are evil; it's an excellently simple plot that is pure entertainment.  But it's Val Kilmer who takes this movie to the next level.  His portrayal of Holliday is the best of his career, crafting something beautiful out of a fairly sinister man, forcing us to love this heartless gambler.  It's a once-in-a-lifetime role, one that defines the movie and holds everything together despite the film's imperfections.  With a partially true story, a time period that American's can't help but love, Russell's solid base, and Kilmer's spectacular acting, Tombstone finds itself in unexpected company among the best movies of the 90s.